India had dropped Keaton Jennings in the slips early on Day One. He went on to make 42.

India might have come back strongly (thanks to Virat Kohli‘s spectacular 149) into the first Test of the series against England, at Edgbaston, Birmingham. However, there are cold facts India need to address. Catching in the slip cordon is definitely a matter of concern. Even here, Ajinkya Rahane the first non-wicketkeeper to take eight catches in a single Test dropped Keaton Jennings on the first morning of the Test.

Mohammad Azharuddin, arguably the greatest slip fielder in the history of Indian cricket, elaborated on how to improve slip fielding, while speaking at a Karnataka Premier League event: “Slip is a specialised position. You have to identify the players and they should practise slip catching. Especially the ones playing the longer format should take at least fifty to sixty catches in the position during practice.

“We have to identify them because they need to proactive and willing to do it. Sometimes, players don’t want to. You need to stand in the right position, concentrate for long periods of time. It’s a difficult ask.

“Fielders at slip positions need to adjust. Sometimes you stand too high. Then the ball falls near your feet [and] you can’t get down. You need to stand a bit crouched, so that you can go down and if the ball is high you can jump as well. Reactions and reflexes have to be good, especially when you are fielding against spin.” 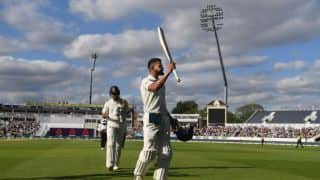