India fought hard but were always behind considering the fact that they lost key moments.

Australia lead by 326 runs at the end of Day Four of the third Test against India in Melbourne. With a day to go, Australia are in the driver’s seat and will perhaps consider a declaration overnight. India had their moments through this game, but as has been the case,

Though over an hour was lost due to a rain interruption after lunch, this was a good day of cricket with both sides putting their foot forward. However, Australia clearly have the advantage despite the Indian fight. Considering the situation, India would rue their collapse of the previous evening.

David Warner and Chris Rogers resumed the Australian challenge soon after India were bundled out for 465. The tourists could add only three runs to their overnight score. Warner started off in full flow as he drove anything outside the off-stump. He was moving along at a very good rate and did not show any pain despite the thumb injury and the blow he suffered in the nets a few days ago. Warner was dismissed for a quick 40 by Ravichandran Ashwin, who trapped him plumb in front.

Rogers continued and rallied the innings even as the Indian bowlers enjoyed a few good spells. Ashwin was in good touch and tricked the batsmen through the innings. Shane Watson missed out on yet another start when he edged Ishant Sharma to the wicketkeeper. Steven Smith was dismissed for only 14 when he tickled one down to leg-slip.

Rogers was on song and went on to get his fourth fifty of the series, all coming in the last four innings. On 69, he dragged one back onto the stumps off Ashwin. Joe Burns and Brad Haddin had short stays in the middle but Shaun Marsh carried on and took Australia’s lead past 300. On this surface, it could be a tricky challenge going into the fifth day. Australia would mull over their declaration overnight.

India would largely be happy with their effort but again, they allowed a partnership between Mitchell Johnson and Shaun Marsh towards the end. Having lost a few crucial moments, they have always been behind the eight-ball in this match. Marsh completed a fifty and went unbeaten into stumps with Ryan Harris.

Live Blog of the match 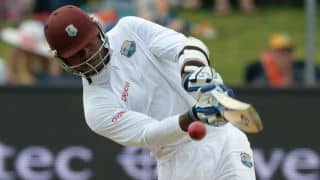