India have taken four wickets as England chase 319 at Lord's.

When India embarked on this tour to England, not many may have given them a good chance even though England were struggling. But, at the end of Day Four in the second Test at Lord’s, India are in with a chance of winning the game with England reeling at 105 for four, chasing 319. It was a day that saw momentum swings yet again, but, India are in the driver’s seat.

India started the day being 145 runs ahead and were looking to build a good challenge. Though Murali Vijay started well, MS Dhoni was cautious and was very patient in the middle. Vijay  was good and was moving towards his ton, but Dhoni’s vigil came to an end. In walked Ravindra Jadeja and took the game in his hands. Even as Vijay batted patiently, Jadeja took the attack to England, playing some delightful strokes, especially off James Anderson.

However, Vijay missed out on finding a place on the Lord’s honours board as he was caught behind for 95. Jadeja continued, using his feet to the seamers, smashing through the line, lofting down the ground, to move to his fifty off 42 balls. Meanwhile, Bhuvneshwar Kumar also got his eye in. Playing with typical temperance, he went along to his half-century as the pair helped India extend their lead above 300. India were ultimately bowled out for 342, leaving England with 319 runs.

England  then started their innings a bit cautiously before tea. Alastair Cook looked a lot better as he was cutting the ball with more confidence. But, there was always something for the bowlers. Now, even the spinner had a chance given the fact that the surface had gone through some wear and tear.

Just before tea, Ravindra Jadeja was introduced in the attack and he had Sam Robson leg-before. The ball may have hit him marginally outside the line, but he was given.

After tea, Gary Ballance and Alastair Cook were solid and batted well. Jadeja kept asking them questions as the edges went past the fielders. It was quite bizarre to see that Dhoni had gone back to Jadeja. He wasn’t standing upfront as usual. It was almost as if a medium-pacer was bowling.

England had moved to 70 and both batsmen were in; it was a matter of patience as remarked by a few commentators. Mohammed Shami was brought in and he got a wicket off the first ball of his new spell as Ballance played forward to an overpitched delivery and was caught behind. Ishant Sharma then had his say when he bowled Ian Bell for a single in the next over. The ball had kept very low and Bell was castled as a result. Ishant wasn’t done there as he came from round the wicket to Cook a little later and he edged one to Dhoni. India were in firm command with England at 74 for four.

Moeen Ali then joined Joe Root. Though they had a few problems, they safely saw England through to stumps. Moeen is lucky to be out there as Jadeja had trapped him plumb in front, but Kumar Dharmasena gave it not out. 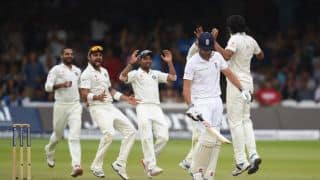 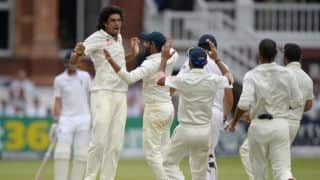 India tour of England 2014: Three quick strikes tilt balance in favour of India at the end of Day 4