Wriddhiman Saha scored his second Test half-cenutury to see India through to the lunch session.

India head into lunch on Day Two of the second Test of the three-Test series at P Sara Oval, Colombo in a decent position. They are currently 386 for the loss of eight wickets at lunch after batting for 111 overs. India were 319 for 6 at stumps on Day One with Wriddhiman Saha at the crease. Rohit Sharma was out for 79 and it prompted the umpires to call it enough for the day. Saha got a couple of lives in the morning session. He was bowled bu the bails did not come off and while he was still on his overnight score of 19, he survived a close caught behind appeal. Ravichandran Ashwin was out early but Saha got good support from Amit Mishra. Live cricket updates: India vs Sri Lanka 2015, 2nd Test at Colombo, Day 2

Mishra was dismissed by Dushmantha Chameera for a useful cameo of 24 runs caught behind the wickets. Saha played on carefully and ensred that he got to his second Test half-century and got India towards 400. India will want to bat on after lunch and get as closer to a target of around 450 with both Ishant Sharma and Saha looking good.

It was the 164-run stand between KL Rahul and Virat Kohli that steadied India after they were struggling at 12 for 2 in just the fifth over of the game. Sri Lanka finished with six wickets but could have easily had more. Kohli was aggressive on his way to his 11th Test half-century. Rahul made most of the life given to him with a second Test hundred. He was dropped at gully by Jehan Mubarak when he was on 11. Kohli was dismissed thanks to a brilliant catch by Angelo Mathews. Virat Kohli’s positive cricket leads India forward in 2nd Test against Sri Lanka at Colombo

Rahul scored 108 before top edging a pull behind the wickets. Stuart Binny did not last long enough to make an impact but Rohit had almost seen India through to stumps before getting out leg before to Mathews. Sri Lanka got good assistance from the deck with the new ball and ball took slight turn as well. Live cricket score India vs Sri Lanka 2015, 2nd Test at Colombo, Day 2

Earlier on Day One, India won the toss and elected to bat first. India made three changes with Shikhar Dhawan, Harbhajan Singh and Varun Aaron going out for Vijay,  Binny and Umesh Yadav. Sri Lanka had a forced change to make, they replaced Nuwan Pradeep with Dushmantha Chameera. 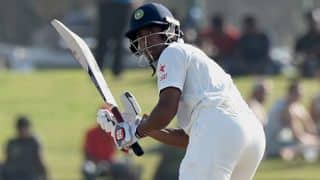