Munaf Patel feels death bowling has been cause of pain for the Indian side.

“If you see individually, if in one match somebody has not bowled well, then in another they have done well. But the partnership that needs to be there between the bowlers was lacking and we lost because of that,” Munaf told PTI.

The Baroda bowler, whose career has been racked by injuries and poor form, felt the Indian bowlers were going for plenty of runs in the death overs in the last few series, prompting Dhoni to criticise them.

Munaf said the presence of senior bowler Zaheer Khan in the two-Test rubber that began today at Auckland would help the youngsters, as they can learn from him.

“It makes a lot of difference. If you make a mistake and Zaheer is around, he tries to help and rectify it. The presence of a senior player on the ground is very important.”

The 30-year-old paceman, who last represented India in 2011, said as a bowler he did not support the new ODI rules.

“No bowler in the world will agree to these things [rules] because batsmen like the rules that are made against the bowlers and bowlers like those which are made against the batsmen. We are not happy, but whatever rules the ICC [International Cricket Council] makes, we have to follow them,” he said. 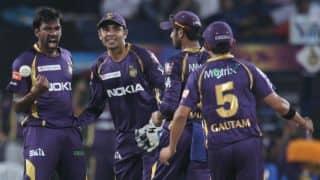