Virat Kohli slammed a patient century while captain Mahendra Singh Dhoni missed it by just one run as the duo showed admirable tenacity under pressure to lead a remarkable Indian fightback which has restored the balance in the fourth and final cricket Test against England at Nagpur on Saturday. 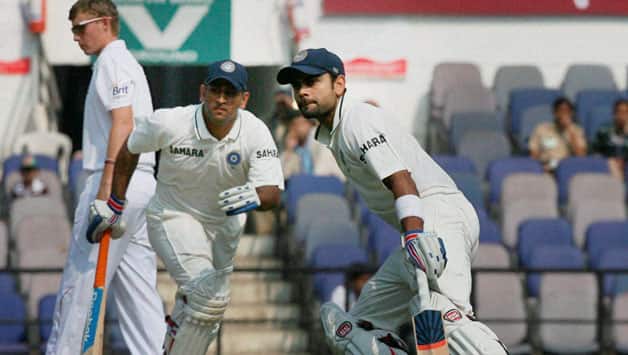 Virat Kohli slammed a patient century while captain MS Dhoni missed it by just one run as the duo showed admirable tenacity under pressure to lead a remarkable Indian fightback which has restored the balance in the fourth and final cricket Test against England at Nagpur on Saturday.

Resuming at a precarious 87 for four in response to England’s first innings total of 330, Kohli (103) and Dhoni (99)played with great discipline and curbed their natural strokeplay on a slow track as the hosts reached 297 for eight at close on the third day which was dominated by the home team.

Ravichandran Ashwin was batting on seven when play was called off after Piyush Chawla‘s dismissal, with India still trailing by 33 runs.

The young Kohli, who has been woefully out of form in the series, notched up his third Test century while Dhoni also silenced his detractors as the pair added 198 runs for the fifth wicket to bring India back into the game.

The Indians, who desperately need to win the match to level the four-match series 2-2, put up a good fightback through Dhoni and Kohli in a partnership which lasted for 84.3 overs. Both of them played their longest Test match knock in terms of balls faced.

It was an uncharacteristically subdued knock by Dhoni who consumed as many as 246 balls before being tragically run out for 99 much to the dismay of the vociferous crowd at the VCA stadium.

Dhoni has been under tremendous pressure after the back-to-back defeats in Mumbai and Kolkata and he showed great character to rise to the occasion with his resolute effort in difficult batting conditions to bail the team out of trouble.

With two days left in the game, India will seek to take a decent first innings lead and put pressure on England who need only a draw to record their first series triumph on Indian soul in 28 years.

Spinner Graeme Swann broke the marathon partnership when he trapped Kohli leg before while debutant Ravindra Jadeja (12) and Chawla (1) fell soon after to peg India back a little bit by the end of the day.
Kolhi faced 295 balls and his third Test ton in 14 games was laced with 11 fours, while Dhoni came up with a captains rearguard knock that was inclusive of eight fours and a six and during which he faced 246 balls.

Kolhi completed his hundred with a square cut for four off Swann and then jumped up in joy to be applauded warmly by the crowd in excess of 20,000 before he was trapped leg before by the England off spinner in the first over after the drinks break.

The departure of Kohli was followed soon by that of debutant Jadeja who was trapped leg before James Anderson, the wrecker-in-chief yesterday with a three-wicket haul, with a ball that jagged back sharply into the left hander when the floodlights were on.

Dhoni, 98 at the fall of Jadeja’s wicket, lost his wicket in his eagerness to get to his sixth Test ton. He drove Anderson to mid off but just failed to beat counterpart Alastair Cook’s accurate throw to the non-strikers end.

The run-out was refererred to the tv umpire who ruled that Dhoni was out though it was a close call.

India lost next batsman Piyush Chawla too, Swann clean bowling the batsman for his third wicket to bring down curtains to a dramatic last hours play in which India surrendered the initiative to the visitors to some extent.

At close, Ashwin was on 7 after a stay of 29 minutes but with only Ishant Sharma and Pragyan Ojha to come, the home side may not be able to take the lead.

The 198-run partnership between Kohli and Dhoni was the second-best stand for the fifth wicket against England, 16 less than the record 214 by Mohd Azharuddin and Ravi Shastri at Kolkata 28 years ago.

Both Kohli and Dhoni, known for their penchant to play shots, curbed their natural instincts to suit the needs of the team in the morning. They grew in confidence slowly as the score moved ahead and then dominated the bowling by playing some excellent shots.

The Indian pair, who added just 59 runs in 32 overs in the pre-lunch session when resurrection of the tattered innings was the need of the hour, showed a lot more urgency to get on with the game in a bid to win the Test in the second session.

Post-lunch, after the new ball was taken after 81 overs, Dhoni and Kohli became a bit more aggressive and the latter especially came up with some glorious cover drives bisecting the packed field against Bresnan and Panesar.

The duo added 81 runs in 27 overs in the second session, including 45 in 16 overs in the first hour of the post-lunch period.

Dhoni, also increasingly aggressive, got a single off Bresnan with the second new ball in hand to raise the 100 of the partnership in just under 200 minutes.

Later Dhoni completed his 28th half ton in his 73rd Test with a square cut four off Bresnan in 198 minutes and off 137 balls, including 7 fours as the duo grinded the England bowling attack on a slow wicket.

The shot of the day came when Kolhi drove Bresnan to the fence on the front foot that bisected cover and extra cover fielders.

When Swann came for a new spell, Dhoni carted the off spinner over long on for his first six of the innings before the duo saw the 200 of the innings come up in the 93rd over and after six hours and 15 minutes.

Bresnan troubled Dhoni before the tea break, by twice rapping the Indian captain on the back thigh with balls that jagged back sharply but they seemed to miss the leg stump and the strong appeals were turned down by umpire Rod Tucker.

The fast bowler also could not bend down fast enough on his follow-through to accept a low return catch from the Indian stumper in between these two lbw appeals. Dhoni was on 72 then.

Sachin Tendulkar should continue as long as he wants to: Viv Richards