Hello and welcome to CricketCountry’s live cricket blog and live cricket updates of the third day’s play between India and the West Indies, at Sir Vivian Richards’ International Stadium in Antigua.

Hello and welcome to CricketCountry’s live cricket blog and live cricket updates of the third day’s play between India and West Indies, at Sir Vivian Richards’ International Stadium in Antigua. After choosing to bat first, India scored 566 for 8 declared, courtesy Virat Kohli’s maiden double hundred and Ravichandran Ashwin’s patient 113-run innings. In reply, West Indies put up 31 for 1 at the end of day’s play. The Day 3 of this contest will decide which way the pendulum will eventually swing. While the hosts will aim to score as many runs, India will eye on bowling out West Indies twice and start the four-Test series on a winning note. LIVE CRICKET SCORECARD: India vs West Indies 2016, 1st Test at Antigua

Indian captain was unbeaten on 143 at the start of Day 2’s play, with India at 302 for 4. He knew he was set for a big innings. He took one step at a time, played the ball by its merit and became the first Indian captain to score an overseas double ton.

However, it was Ashwin’s gritty knock that powered India past 500. He took 237 balls and 12 boundaries to score his third Test hundred. Amit Mishra, who replaced all-rounder Ravindra Jadeja, scored 53 off just 68 balls, inclusive of six boundaries. IND vs WI Live Streaming: Watch live telecast on Ozee.com

For West Indies, spinners Devendra Bishoo and Kraigg Brathwaite took three wickets each. Shannon Gabriel, on the other hand, was the only pacer who managed to take wickets.

Judging by the way the track reacted on the first two days, it won’t be of any assistance for the pacers henceforth. Nonetheless, given the footmarks created and cracks on one side of the wicket, facing Indian spinners will be a difficult task for the West Indian batsmen. 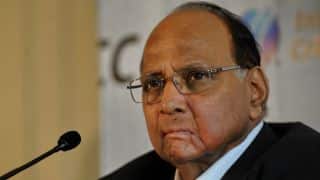