Murali Vijay was dismissed for 95 as India stretched their lead to 243.

The interesting contest at Lord’s continues as the morning session on Day Four of the second Test. England took three important wickets to dent India, but the tourists continued and helped India stretch their lead closer to 250.

India began the day being 145 runs ahead. Murali Vijay started off positively, playing a few good strokes. There were many shots he played through third-man, which went for four. But, Alastair Cook, for some reason, did not place the third-man and that leaked a lot of runs. However, the shot that stood out was a straight drive for a four.

Meanwhile, MS Dhoni continued to be defensive and was happy leaving deliveries. He added only a few runs before he was caught behind off Liam Plunkett. Stuart Binny was given a promotion, but he was dismissed for a nine-ball duck as he charged to Moeen Ali and chipped it high in the air. Alastair Cook took a good catch running back.

Ravindra Jadeja walked in and started playing his shots immediately. There were pulls, drives and other shots that showed his confidence. But, his battle with James Anderson was much awaited as he lofted him down the ground for a six and also charged to hit him for a four through cover. They also exchanged a few words.

But, Vijay’s long vigil ended as he edged a good length delivery outside the off-stump. At 95, he had a chance to write his name on the Lord’s honours board. Sadly, he would have to wait for another chance. Bhuvneshwar Kumar walked out and has batted with the same intent as he has through the tour. 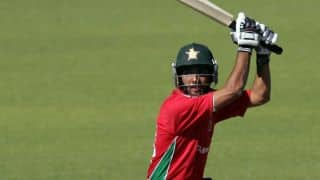