Zimbabwe were put to bat first and are playing at 111/6 in 30 overs against India in 2nd ODI at Harare.

India’s leggie Yuzvendra Chahal comes into attack and how! He grabbed two wickets within 26th over one after the other and was almost on hat-trick that he missed with a dot ball by new batsman Richmond Mitumbami. Zimbabwe’s Vusi Sibanda and Skikander Raza were going steady with their innings from 10th over until 25th over. They achieved 60 runs stand between them after Chahal grabbed the opportunity picking Raza first for 16 and another wicket of Elton Chigumbura immediately. Chahal was on a hat-trick that he missed with new batsman Elton Mitumbami being safe with dot ball. Sibanda achieved his 21st ODI fifty and was also dismissed soon by Chahal himself for 53 off 69. LIVE CRICKET SCORECARD: India vs Zimbabwe 2016, 2nd ODI at Harare

Earlier, India’s pace duo of Barinder Sran and Dhawal Kulkarni continued their spectacular performance against Zimbabwe in the 2nd ODI at Harare. They, yet again, bowled in the right channel and troubled the incompetent Zimbabwe batsmen right from the word go. Sran drew first blood as opener Hamilton Masakadza flashed a short and wide delivery directly in the hands of Jasprit Bumrah at third man. Before Zimbabwe could steady the ship, Sran struck again and sent Peter Moor back to the pavilion.

MS Dhoni won the toss and elected to bowl first. India did not make any changes to their side while Zimababwe made a single change with Craig Evrine kept out and Sean Williams making an entry.  Dhoni is one step away from registering his first series win after October 2014. In the first game of the three-match ODI series against Zimbabwe at Harare, the India thrashed the hosts by 9 wickets, thanks to Jasprit Bumrah’s match-winning four-for and KL Rahul’s stunning unbeaten debut century. 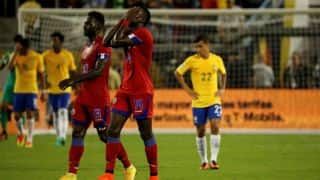