India will look to maintain their stronghold at the top of the ICC Test rankings when they take on West Indies in the two-match Test series starting October 4 at Rajkot.

India will look bounce back after 1-4 drubbing in England, and will hope to maintain their stronghold at the top of the ICC Test rankings when they take on West Indies in the two-match Test series starting October 4 at Rajkot.

With 115 points, India are leading the charts with West Indies at No.8 with 77 points. A 2-0 win will see India gain just one point while a series victory for West Indies could see them bridge the gap with No.7 ranked Pakistan.

On the other hand, India can slip to 108 points with an unlikely 2-0 loss and Australia could overtake them if they defeat Pakistan 2-0.

However, Pakistan will also be looking to improve their ranking when they take on Australia in the two-match series starting Oct 7.

The series gives Pakistan the opportunity to edge Sri Lanka to sixth position if they are able to complete a 2-0 series win over the opposition, while a 1-0 series win will be enough for Australia to overtake South Africa and claim second position behind India.

In the ICC Test batsman ranking, Indian skipper Virat Kohli with 930 points is miles ahead of the rest, barring Steve Smith (at No 2 with 929 points), who is suspended for a year, and will look to extend the lead.

Cheteshwar Pujara (sixth with 772) and KL Rahul (19th) will be other leading India batsmen in the series while the spin pair of Ravindra Jadeja (fourth) and Ravichandran Ashwin (eighth) would be looking to capitalize on home conditions.

The West Indies boast of Kraigg Brathwaite in 13th position while three of their fast bowlers are in the top 20 Shannon Gabriel (11th), Jason Holder (13th) and Kemar Roach (19th) and would be hoping to get some help from the Indian wickets.

For Australia, Usman Khawaja is the leading batsman in 20th position in the absence of Smith and David Warner, while Mitchell Starc (joint-14th) and Nathan Lyon (16th) are the leading bowlers. 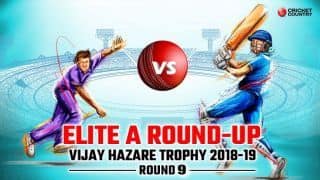