India have slipped after their win at Lord's with humiliating defeats in Southampton and Manchester.

Battered and bruised in the last two matches, it will be a test of character for India‘s underperforming players as they go into the fifth and final Test against England here tomorrow, hoping to restore their pride and level the series.

India have slipped badly after their historic win at the Lord’s with humiliating defeats in Southampton and Manchester and Mahendra Singh Dhoni and his men have a daunting task of saving the series, which they are trailing 1-2.

While the young batting line-up has crumbled time and again the bowling has not all looked penetrative which has allowed the hosts to stage a dramatic turnaround.

India however have got a big boost with lanky paceman Ishant Sharma being fit for the final game. The team management however face a selection dilemma on whether to retain some of the out-of-form players like Ravindra Jadeja or try out the bench strength.

India’s batting has been a huge let down in the last two Test and the visitors need Virat Kohli and Cheteshwar Pujara to do justice to their talent and potential. Pujara, not part of the ODI team, will have only one more chance to come good. Kohli will do himself great harm if runs continue to elude him at the Oval. For, on the blades of these two batsmen, rests India?s best shot at redemption.

Gautam Gambhir has been under pressure in his comeback trail but it’s time that the Delhi southpaw shows that he still belongs to the top league. If he manages to stay at the crease for a long time, it would set up India well in their long fight to save the series.

India would certainly be bolstered by the expected inclusion of fit-again Ishant, who had orchestrated their famous victory at the Lord’s. The gangly Ishant is like to replace Pankaj Singh as Varun Aaron impressed with his ability to generate pace and trouble the English batsmen.

Catch all the coverage of India s tour to England here 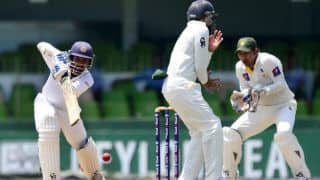