India's run chase suffered a serious blow as the visitors lost dangerous Virender Sehwag early in their second innings at lunch on the fourth day of the first cricket Test against Australia. 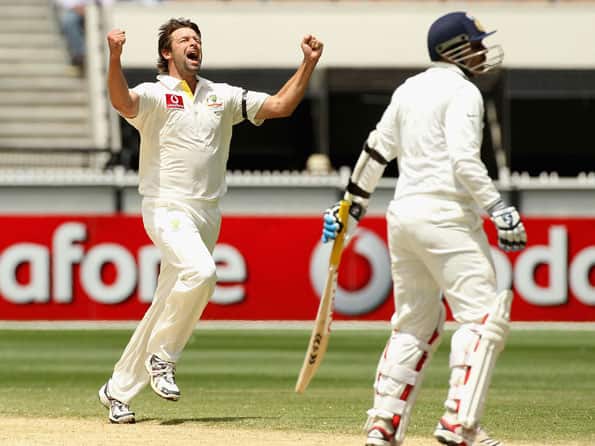 India’s run chase suffered a serious blow as the visitors lost dangerous Virender Sehwag early in their second innings at lunch on the fourth day of the first cricket Test against Australia.

Chasing a stiff target of 292, India were 24 for one in their second essay with Gautam Gambhir (6 not out) and Rahul Dravid (5 not out) holding the fort for the visitors at the break.

India were on the backfoot straightaway in their second innings when Sehwag (7) was brilliantly caught by Mike Hussey at point off Ben Hilfenhaus.

Sehwag cut hard a Hilfenhaus wide delivery only to find an agile Hussey at point, who made no mistake in pouncing on the opportunity.

Earlier, Australia, resuming at the overnight score of 179 for eight, rode on mixture of luck and bold hitting to stretch their innings to 240 before being bowled out 42 minutes before the lunch break.

Overnight batsman Hussey, unbeaten on 79, could add only 10 runs to his total but his young partner James Pattinson (37 not out) put on vital 43 runs for the final wicket with Hilfenhaus (14).

The last-wicket partnership between Pattinson and Hilfenhaus was the second biggest stand for Australia in their second innings after Ricky Ponting and Hussey had put on 115 runs for the fifth wicket.

If not for a missed chance, India could have wrapped up the Australia innings early as Pattinson was dropped on 15 by Zaheer Khan at fine leg off Umesh Yadav with the hosts’ scoreboard reading 203 for nine.

Australia’s lower-order rose to the occasion for the second time in the match as their last two wickets produced 31 and 43 runs respectively.

Pattinson, overnight on three, began with a glorious cover drive off Yadav and did so again later to move into double figures.

The dropped chance seemed to have emboldened him further as he pulled Yadav in the same over to stretch the Australian lead.

Hussey, on the other hand, was extremely tentative against Yadav’s inswingers but managed a couple of fours against Zaheer Khan.

Hussey though departed in the same over when he edged a Zaheer delivery to captain Mahendra Singh Dhoni behind the stumps. He made 89 off 151 balls and hit nine fours in the process.

But after Hussey’s dismissal, Pattinson and Hilfenhaus showed great resolute as Dhoni fell back on spin and introduced Ravichandran Ashwin.

But the final pair stayed put and Hilfenhaus made the most of the change in bowling by twice thrashing Ashwin through the off-side and once doing an all-run four.

India finally brought a lid over the innings when Hilfenhaus edged Ishant Sharma to VVS Laxman at second slip.

Hilfenhaus made 14 runs off 29 balls and hit hitting three fours during his 45 minutes vigil at the crease. (PTI)

I have a lot more cricket left in me: Brad Haddin