At the end of the first innings of the much-hyped India-Pakistan semi-final at the PCA in Mohali, it would be safe to say that the debate on whether or not Wahab Riaz should have played in place of Shoaib Akhtar was resolved to its fullest. 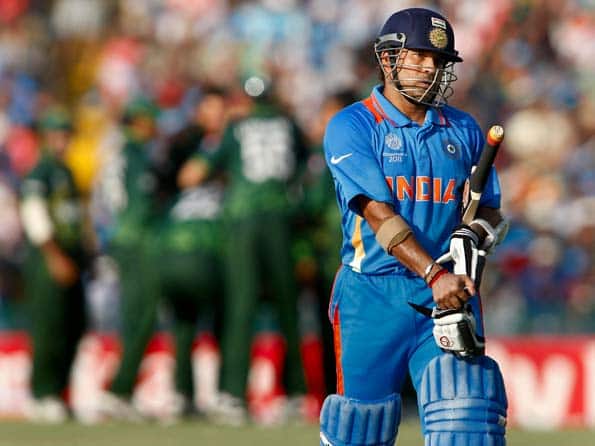 Sachin Tendulkar of India made 85 runs

At the end of the first innings of the much-hyped India-Pakistan semi-final at the PCA in Mohali, it would be safe to say that the debate on whether or not Wahab Riaz should have played in place of Shoaib Akhtar was resolved to its fullest. Riaz ran through the Indian batsmen in the middle overs to restrict them to only 260 for 9 after 300 looked quite achievable at one stage. The other debate around the non-selection of Ashwin will need the completion of the second innings of the game to resolve.

Virender Sehwag allowed the Indians to get away with a start that is usually associated with him. In the process, he took apart Pakistan s best pace bowler coming into the game with 21 runs off his second over.

48 runs were added in less than six overs and it was only the introduction of Riaz that changed things around for the Pakistanis. Sehwag played across the line and was declared out lbw, confirmed by the use of DRS as well.

At the other end, Tendulkar s innings was straight out of a charity game. Or at least Pakistan looked to be in a charitable mood anyway.

He was slow off the blocks when Sehwag was at the other end but once he got set, one would have expected him to get moving. Instead, when he was only on 23, he was adjudged out lbw by Ian Gould, a decision that looked reasonably good. The DRS was used and much to the chagrin of the Pakistanis, the ball was deemed to be missing the leg-stump.

Off the very delivery, Tendulkar was half a frame from being declared out stumped, but given the doubt, the third umpire gave him the benefit. Then, on 27, a pull should have landed in Misbah ul Haq s hands, but was floored, before an edge went through the non-existent slips and then Tendulkar was dropped by Younis on the other side of the wicket.

This was hardly all. In an innings so full of dropped catches, Kamran Akmal added with his customary drop while the normally reliable pair of hands of Umar Akmal gave away the simplest of the catches with the maestro on 81.

It took Afridi to finally hold on to the offering from Tendulkar as he walked away 15 short of what would have been his 100th international, but arguably the scratchiest of the centuries.

Gautam Gambhir s stand with Tendulkar, amidst all the missed chances was of 68 runs and it looked at 116 for 1 in the 19th over, that 300 was achievable on the rather easy-looking pitch.

It was the dismissal of Gambhir, stumped off the bowling of Saeed Ajmal that changed things around in favour of Pakistan. Riaz was brought back for a spell and pushed India back further. Virat Kohli s 21-ball nine run vigil was ended off a ball that swung away and took the edge of the bat to accord a simple catch but the biggest blow came in the form of a first ball-duck for Yuvraj Singh. An in-swing, yorker-length ball was missed by the Mohali boy, beating him for pace and pegged his stumps back.

With the man in form dismissed for a duck, Tendulkar tried to reverse what was a poor innings by his standards by battling on. He was helped in no small way by the Pakistani fielding but in the end, his 85-run long misery at the crease was terminated by a catch by Afridi himself who had had three drops off him.

Dhoni s scratchiness in the tournament with the bat has been prolific and it was no different here. From the time he came to the crease, 64 runs were scored, of which he scored only 25 that took 42 deliveries coming before he became Riaz s fourth victim in a dismissal that looked reminiscent of the Sehwag wicket.

Harbhajan Singh and Zaheer Khan fiddled around for 12 and nine respectively but with Suresh Raina (36*) at the other, their tactics to try to hit deliveries out of the park need questioning. In the end, 43 came off the batting Powerplay overs but only 60 off the last ten as Riaz ended with a five-wicket haul.

260 is the same score that India had chased down against Australia on a far more wearing track than this one. India will need an inspired performance from their bowling under lights to have a chance of winning this one.