VVS Laxman and Suresh Raina rescued India from an early slump but the visitors were still bowled out for 201 by West Indies in their first innings on the opening day of the second Test. In reply, West Indies were 30 for three at stumps, trailing India by 171 runs. 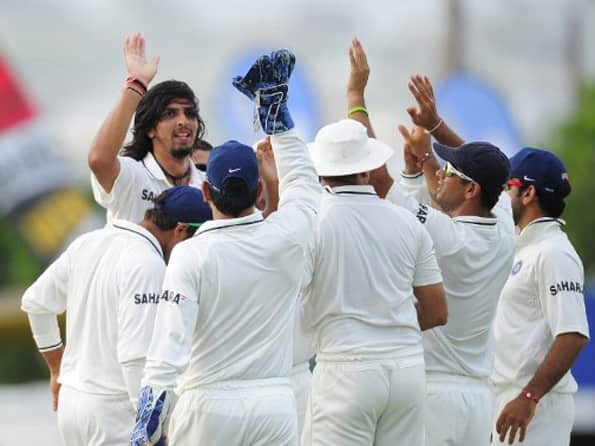 VVS Laxman and Suresh Raina rescued India from an early slump but the visitors were still bowled out for 201 by West Indies in their first innings on the opening day of the second Test.

In reply, West Indies were 30 for three at stumps, trailing India by 171 runs at the Kensington Oval.

Ramnaresh Sarwan was batting on 10, while night watchman Devendra Bishoo had just joined him at the crease before the end of day’s proceeding.

Earlier, India were left struggling at 38 for four, courtesy pacer Ravi Rampaul’s three-wicket haul in the pre-lunch session. But Laxman and Raina added 117 runs for the fifth wicket to bring the visitors back into the game.

Laxman dropped the anchor initially and along with Raina started dominating the bowlers in the afternoon session but West Indies bounced back after tea with Fidel Edwards and Bishoo taking three wickets each.

If Rampaul (3 for 38) was incisive in the first session, Edwards (3 for 56) and Bishoo (3 for 46) were lethal in the final session as India lost their final five wickets for just 34 runs.

India did manage to get colour back on their cheeks with three strikes of their own — openers Adrian Barath (3) and Lendl Simmons (2) departed with only five runs on board and left-hander Darren Bravo (9) left with just a delivery remaining for the day’s play.

All three Indian seamers — Ishant Sharma, Praveen Kumar and Abhimanyu Mithun — picked up a wicket each as West Indies ended the day on 30 for three.

Nothing went right for India as the visitors, for the third straight time in the series, made a score of 200 or thereabout which conveyed as much about the frailty of India’s batting as it did about the potency of the home attack.

Opener Abhinav Mukund (1) was out to a rising delivery from Rampaul in the second over of the morning which the opener could only lob into the hands of the gully fielder. It followed a run-barren session for the visitors and only thing happening was the fall of wickets.

The first Test hero Rahul Dravid (5) was surprised by a Darren Sammy delivery which rose from a length and hard as the batsman tried, it still took the top of his blade to go to second slip.

Opener Murali Vijay (11) tried hard to take roots in the middle but his tendency to waft his bat on the legside cost him his wicket. His bat followed a legside delivery of Rampaul and edged a catch to wicketkeeper Carlton Baugh.

It was Rampaul’s first over of his second spell and he made it a twin strike when an unsure Virat Kohli (0) could only send a ball off the edge of his bat to slips. Rampaul had an awesome figure of 8-5-4-3 in the pre-lunch session.

So slow and painful was India’s progress that the opening session yielded only 44 runs and as many as four wickets were lost.

India looked a transformed side in the post-lunch session as Laxman and Raina added an unfinished 103 runs for the fifth wicket. Both batsmen hit half-centuries and looked good for many more as they put the host attack to sword with brilliant counter-attack batting.

But West Indies were fortunate to get a breakthrough in the final session when umpire Asad Rauf ruled Raina out at forward short leg off Bishoo after the ball had ricocheted off the batsman’s pads.

A distraught Raina yelled out in anguish and then dropped his bat before dejectedly walking back to the pavilion. Raina batted for 137 minutes and hit seven fours from 105 balls for his 53 runs.

Raina’s departure gave the hosts the breakthrough they had so desperately wanted and the Indian innings subsided quickly from then on.

Skipper Mahendra Singh Dhoni failed for the third time in the series when he holed Edwards out to mid-on fielder.

Harbhajan Singh (5) awkwardly defended at an Edwards bouncer and presented forward short leg with a chance.

The biggest blow to India was delivered by Bishoo who drew Laxman to punch one which rose and spun sharper than the batsman had bargained for.

The tail subsided without any fight and presented West Indies with their best day of the series so far.

Barath fell to a catch in the slips off impressive Ishant Sharma, while his partner Praveen Kumar got the other opener Lendl Simmons to a catch to wicketkeeper. Mithun then got into the act and dismissed Bravo in his second over.