Sri Lanka Men, who are yet to get over the void created by Kumar Sangakkara and Mahela Jayawardene, are put in front of India Men, the best side in Test cricket.

Sri Lanka Men, who are yet to get over the void created by Kumar Sangakkara and Mahela Jayawardene, are put in front of India Men, the best side in Test cricket. As a result, Day One of the first Test between the two witnessed an utterly uneven contest where Shikhar Dhawan and Cheteshwar Pujara ruled the 22 yards, battering and tiring every opponent bowler, barring Nuwan Pradeep. One run short of 400 on the board already after Day One and 7 wickets in hand, India are well in hunt for a gigantic total on Day Two as Sri Lanka search new hopes with the dawn.

India were the favourites for the series and the absence of the likes of Dinesh Chandimal and Dushmantha Chameera will hurt Sri Lanka even more, as India gained momentum after the way Dhawan and Pujara batted on a flat Galle track. Nuwan Pradeep, the lone fighter for Sri Lanka, struck thrice, including Virat Kohli cheaply. However, that did not hurt India as much as Sri Lanka would have liked, as India probably have a batting going down till No. 8 of the line-up.

To add further salt to the wound, Sri Lanka will not have the services of Asela Gunaratne, the middle-order batsman who has gained prominence with his consistency with runs and aggression. His broken thumb has further broken Sri Lanka’s remaining hopes to reply with the bat.

Despite the run-feast and a wicket where batsmen found a lot of support, Abhinav Mukund failed in his 7th Test (read 7th chance given to him to prove his potential). Skipper Kohli edged for 3. However, more than his batting, his skills to pretend he had not edged it earned him praises over social media. Nevertheless, India need not worry at this stage: Pujara looks in no mood to end anytime soon, while Rahane will be hungry for a century as well. Even if one or both of them throw their wickets away, Hardik Pandya, Wriddhiman Saha, Ravichandran Ashwin and Ravindra Jadeja are there to get the better of Sri Lankan bowlers.

The hosts will hope their pacers, Lahiru Kumara and Pradeep, to find assistance early in the morning of Day Two to outwit the Indians. However, as the day moves on, Rangana Herath, the most successful man during India’s last hunting in Sri Lanka, will have to prove his worth as the biggest weapon for the team in the longest format. 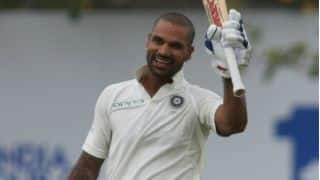