Despite the wash-out against Australia , they would have gone away happy from their trip to Sydney.

Sydney: The Indian team left for Perth on Tuesday, keeping in mind the need to overcome batting and bowling worries ahead of their virtual semifinal against England in the tri-series on Friday.

Despite the wash-out against Australia , they would have gone away happy from their trip to Sydney.

The team arrived here knackered from the long tour so far, which was evident in the listless manner they lost to England in Brisbane. That defeat also meant the need to win both their remaining matches to qualify for the tri-series final in Perth on February 1.

They practiced for two days, and rested for another two, with the match abandoned on Monday. All in all the team management was able to achieve a balance between time-off and time spent on the field, whilst gaining two points without much sweat. Now their clash with England on Friday assumes the simple nature of a semi-final: winners progress and play Australia on Sunday.

The Men in Blue did miss out an opportunity though, and it was to test their new-found bowling combination. At Melbourne, skipper MS Dhoni had chosen three medium-pacers and two spinners. At Brisbane, there were three medium-pacers, one spinner and Stuart Binny playing the all-rounder card. Thanks to his individual good showing against England, he was retained in the eleven, with two spinners and two medium pacers the preferred combination at Sydney.

Of course Monday’s selection was also influenced by the conditions, cloud-cover and rain having a major say on the day. Even so, despite the need to play two spinners at the SCG, the team management still preferred to keep Binny in the mix.

It could point towards Dhoni’s new-found confidence in Binny’s ability, particularly since he is also part of the World Cup squad and the skipper has professed the need for a swing-bowling all-round option over the past season. This might be the shape India’s bowling attack  and indeed lower-order takes when the World Cup comes around.

In the meantime, a new ploy emerged within this chosen bowling combination. On Sunday, in his pre-match conference, Dhoni had said that both Ishant Sharma and Ravindra Jadeja were available for selection. He had also hinted that they won’t be playing since there was no need to push players with niggles and hurt their chances ahead of the World Cup.

Jadeja in particular was under the scanner since his fielding ability from the deep was still under some doubt, as per the skipper. Also, he was seen leaving for the hotel with his left shoulder wrapped up and an ice-pack in place. Clearly he was a non-starter, yet at the toss he found a place in the playing eleven.

Did the team management pre-empt that the England game in Perth would be their only shot at making the final and as such all experimentation (in a competitive game) needed to be done by Monday? If so, the selection of two left-arm spinners Jadeja and Axar Patel in the same eleven is perfectly understandable.

When the squad for the tri-series and World Cup was announced, it was obvious that Patel was an understudy for Jadeja. With India’s ploy of playing six batsmen, R Ashwin becomes handy with his batting in the lower-order. But in Jadeja’s absence, Patel has shown some brilliant control, first in home conditions and then in the first two matches here. He has also been given a chance to bat at number seven, to find his footing with the bat in hand.

So far, it hasn’t worked, for Patel has found out that batting in the IPL isn’t the same as batting in Australia.

Given more chances he will improve of course, but is there enough time before the World Cup for that to happen? Or is the team management in a clear mood to fast-track his progress? If so, Monday was that pointer.

When asked about the lower-order in Melbourne, Dhoni had said, Whenever he gets fully fit, with Jadeja coming back, it becomes slightly easy for us because we all know that he can hit out. You may bowl short-pitched deliveries to him but he is someone who can hit the ball. Axar, we all know, can definitely bat. Tomorrow he can be as good as Jadeja. With them, you can also have the option of playing tow left-arm spinners if needed, depending on the opposition.”

In that light, Monday was a big chance missed to see how this new-look attack features against a strong batting line-up. If India can trump England on Friday, they might get another opportunity to run this experiment on Sunday. 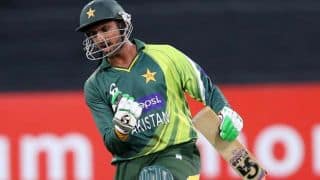