India must play Pujara and Kuldeep at Lord's: Harbhajan Singh
By CricketCountry Staff

NEW DELHI: Indian spinner Harbhajan Singh has vouched for the inclusion of batsman Cheteshwar Pujara and chinaman bowler Kuldeep Yadav for India’s second Test against England starting Thursday. India opted for four fast bowlers and one spinner in R Ashwin during the first Test at Edgbaston also also left out the experienced Pujara from the line-up.

READ: Pujara too good a player to be dropped, says Michael Holding

Pujara’s replacement at No. 3, KL Rahul managed 4 and 13 as no one, barring skipper Virat Kohli, could come up with an important contribution. More importantly, the lack of a second spinner hurt India, especially in the second innings as Sam Curran launched a counter attack on Ashwin, helping England recover from 81/7 to eventually put up 180 on the board, a total that proved match-winning for the home team.

Harbhajan, speaking to Mid Day stressed on the importance of Pujara’s presence in India’s Playing XI and added that the batsman’s experience of seeing out the new ball can be a vital factor for Indian batting.

“I don’t care who should be dropped, but the Lord’s Test playing XI must have Pujara. He is a player who can take the polish off the new ball and stay at the crease,” Harbhajan said.

Pujara, the No. 6 ranked Test player, had only managed 172 runs at 14.33 from six games Yorkshire in the County Championship earlier this year, and despite feeling assured of his place in the XI, he was omitted from the side.

In England as a commentator for the Test series, Harbhajan also expressed a desire for India to have Kuldeep in their ranks. With nine wickets in two Tests, Kuldeep has shown tremendous promise to carry his limited-overs exploits into the Test format, a factor that can prove detrimental if India are to level the series at Lord’s, whose surface is somewhat conducive to spin, and the possibility of playing a wristspinner along with Ashwin should help India’s chances.

“Again, I am not bothered who is dropped but Kuldeep must play,” Harbhajan emphasized.

India lost the first match of the five Test series by 31 runs but will take heart from the fact that the last time they played a Test at Lord’s (in 2014), the side won by 95 runs with Ishant Sharma producing his career-best figures of 7/74. 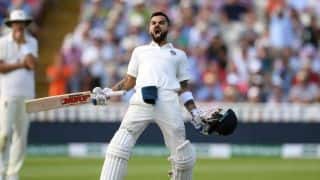