Lungisani Ngidi's twin strikes have put India on the mat on Day Four of the second Test.

India are in deep trouble at stumps on Day Four of the second Test versus South Africa at Centurion. The uneven bounce has brought India on the mat in pursuit of 286. With Murali Vijay, KL Rahul and Virat Kohli sitting in the dugout, the onus lies on Parthiv Patel, Cheteshwar Pujara and the men yet to come to unearth something spectacular and level the series on Wednesday.

The session resumed with South Africa sitting at 230 for 7, lead by 258 runs. Faf du Plessis shifted gears as he lost his partners at the other end. Ishant Sharma and Mohammed Shami had troubled the middle order. Now Shami came back to dismiss Kagiso Rabada as Kohli held on to a slip catch. Du Plessis, who had looked content with a blockathon earlier, accelerated before giving a return catch to Jasprit Bumrah off an off-cutter.

South Africa ended their innings at 258, setting India a stiff target of 286. The target is a tough one, with the track producing unpredictable bounce every now and then. India lost their openers cheaply. Vijay went into a shell before falling for 9. The ball kept very low, and rattled his stumps. Rabada got his scalp.

Just like Vijay, Rahul did not look to attack either. He played a careless stroke to gully off Lungi Ngidi. Ngidi then got the big scalp, Kohli. The delivery, almost unplayable, zipped in to trap the Indian skipper for 5. The review went in vain.

South Africa will be firm favourites to seal the series when play resumes tomorrow. India’s top-order failure, along with losing successive tosses, has hurt them big. Their lower order have a humongous task to bail the side in a tricky chase. Pujara’s defense, Parthiv and Rohit’s strokeplay will be put to severe test. 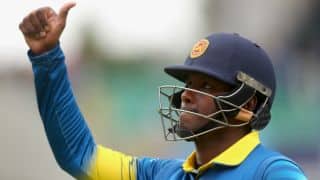 Angelo Mathews encourages Sri Lanka to have a fresh start 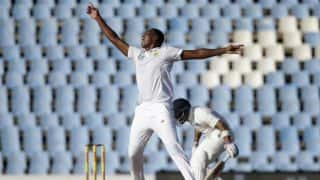