Sangakkara feels India have enough firepower and time to find the players that fit the most in their middle order by the time the 2019 World Cup arrives.

The inconsistency of India s middle order may be a worrying sign for them, but former Sri Lankan batsman Kumar Sangakkara feels the side has enough firepower and the time to find the players that fit the most by the time the 2019 World Cup arrives. The biggest cricket tournament in the world starts May 30th in England and if the recent performances are any indication, India face plenty of selection dilemma to figure the ideal middle-order composition.

India have their core group prey much sorted with Rohit Sharma and Shikhar Dhawan likely to be the two openers, followed by captain Virat Kohli and MS Dhoni likely at No. 6. There have been occasions when Dhoni has come up the order and even batted at 4, but it is very unlikely that he will do that on a regular basis.

“I think they’ve got a very settled squad. They’ve got the senior pro group sorted, MS Dhoni has been outstanding, Virat Kohli has been brilliant,” Sangakkara told ESPNcricinfo. “Then you have Shikhar Dhawan and Rohit Sharma at the top. I just think they need to find that one person for the No. 4 position.”

As Sangakkara points out, India s biggest quandary is their No.4, the tussle for which continues to be between the likes of Manish Pandey, Ambati Rayudu and Kedar Jadhav. Karnataka batsman Pandey has failed to make most of the opportunities provided to him he averages 27 and 2 the home series against Australia last year and Sri Lanka earlier this year. Jadhav has fared better averaging 70 in the Asia Cup, despite being marred by a relapse of his hamstring injury. Rayudu has had a phenomenal IPL and India A, but managed just a single half-century in the Asia Cup. Dinesh Karthik is another player who could be used as a specialist batsman in the side.

Then comes the allrounder position which again is up for grabs. Hardik Pandya may be the frontrunner for that slot but Ravindra Jadeja s emphatic return in the Asia Cup has thrown up another problem of plenty for India.

Sangakkara, however, has vouched in favour of Pandya, while adding that too much chopping and changing will not do India any good.

“Hardik Pandya will be very crucial for them in that allrounder’s role. Plus, they have a brilliant bowling attack. So they will be very confident heading into the World Cup,” he said.

“It’s about settling down and not making too many changes because sometimes it affects players, affects their confidence. So settle on a side, and they have enough options for that, because come the World Cup, they’ll have to pick one of them, so they need to buckle down and pick the best of the lot.”

India have a total of 18 ODIs left before the World Cup five ODIs against West Indies, Australia and March, and three against Zimbabwe to figure out their middle-order combination. 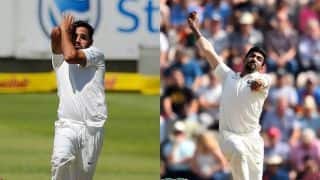