Dravid chose not to react to coach Ravi Shastri's statement which said that this Indian team is the best travelling side in the last 15-20 years.

Former India skipper Rahul Dravid has advised the Indian cricket team that suffered a 1-4 Test series defeat against England recently to prepare better when it comes to facing the Three Lions in their own backyard. “The conditions in England were not easy for batting. I think batsmen of both teams struggled. If you take out Virat Kohli from the equation, it was not an easy series for the batsmen. I have played in England quite a bit, the conditions can be tough, but it is rare to find five Test matches which had conditions as tough as the one they found,” Dravid, who was the last captain to lead India to a series win against England, said on Friday.

“We have to be better prepared for these conditions. We need to try and replicate conditions as best as we possibly can. It was tough out there. Let’s face it,” he added.

After guiding India to their first series win in England since 1986, Dravid was a standout performer among the Indian batsmen on the 2011 tour when he scored three centuries. India were hammered 0-4 in that series.

While the performance has drawn widespread criticism from all quarters, head coach Ravi Shastri termed his side the best travelling side of the last 15-20 years. Dravid chose not to comment on Shastri’s remark. “I think the whole thing was a little bit blown out of proportion. I am not really interested in commenting on what Mr Shastri feels or he doesn’t feel. For me the main thing is what have we learnt from this series?

“What are the lessons that we need to take forward next time we go there? It doesn’t matter whether we are the best or not. These are irrelevant things for me,” said Dravid, 45, who has 13,288 Test runs to his name.

“Tours like England happens once in three or four years and players who have been part of the series and even the coaching staff, they will be disappointed after losing because you never know what happens. We really had a good team this time, the bowling was exceptional, but it still did not work out,” said the current coach of the India U-19 side. 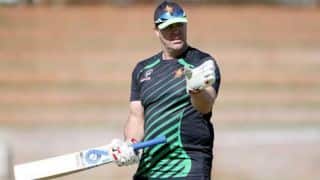