India are tottering at 130/4 after second day's play in the first Test at Auckland.

At a loss to explain India‘s poor batting in the ongoing first Test match against New Zealand, opener Murali Vijay said that more than the pitch, it is the new ball which is hurting willow-wielders on both sides.

The Kiwis piled on 503 runs in their first innings and have reduced India to 130 for four at the end of the second day’s play on Friday.

But Vijay felt the new ball is affecting batsmen in both the teams equally.

“If you see both the innings so far, the new ball did the trick for bowlers in both teams. More than the pitch or conditions, it is the new ball. Initially it tends to swing a bit more and once it gets older, it becomes much easier to bat. That is what is happening in the middle. Hopefully, Rohit [Sharma] and Ajinkya [Rahane] can build a big partnership,” said Vijay.

The opener scored 26 runs, stemming the collapse after Shikhar Dhawan (0), Cheteshwar Pujara (1) and Virat Kohli (4) were sent back with only 10 runs on the board. India need to make another 304 runs to get past the home team.

He built a partnership with Rohit, but was undone when a brilliant delivery from left-arm seamer Neil Wagner knocked back his off-stump.

“The New Zealand bowlers were obviously swinging the ball. But we could have played much better. Maybe in the next innings, we can do that,” said Vijay. 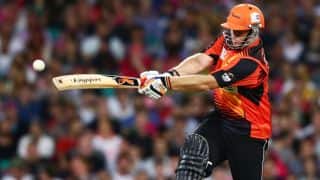