India on back foot as Sehwag departs early

India on back foot as Sehwag departs early

India lost Virender Sehwag early in their second essay as the visitors reached 35 for 1 at the end of the third day on Friday. The visitors still trail England by 451. 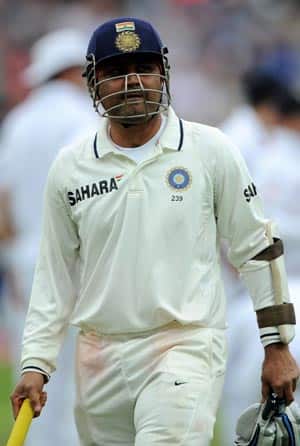 Alastair Cook hit a career-best 294 as a ruthless England buried India under a massive 486-run lead to leave the visitors with a daunting task of saving the third Test and their number one ranking on Friday.

The 26-year-old Cook anchored the innings brilliantly as he batted for close to two days before the hosts declared their first innings at an imposing 710 for seven at the fag end of the third day.

In reply, India lost Virender Sehwag yet again for a first ball duck to be struggling at 35 for one, still trailing by 451 runs to avoid an innings defeat.

Gautam Gambhir (14) and Rahul Dravid (18) were at the crease when stumps were drawn for the day.

With two days left in the match, Indians will have to bat out of their skin to save the Test on an Edgbaston track which is expected to deteriorate on the last day.

A defeat for India will not only seal the series-win for England the series but also the tag of the number one Test team in the world.

In what was built as a high voltage contest between two top teams, has turned out to be a mismatch of gigantic proportions with India being outplayed in every department of the game right through the series so far.

The highlight of the day was Cook’s splendid batting as the left-hander batted for 767 minutes and grinded the Indian attack down for 545 balls, hitting 33 fours.

Leg-spinner Amit Mishra was the most successful bowler for India with three wickets but he gave away 150 runs.

Indians had the worst-start possible to their second innings when opener Sehwag fell to the first ball he faced?caught at first slip off James Anderson as he tried to reach out to an out swinger.

Sehwag had been dismissed off the first ball in the first innings also and it gave the Delhi dasher a completely avoidable pair of golden ducks.

Gambhir too suffered an anxious moment when a Tim Bresnan ripper rose from a length and hit the batsman on his right fingers even as he took an instinctive, evasive action.

Gambhir had another close call when off-spinner Graeme Swann went up for a loud LBW appeal but umpire Steve Davis negative it.

Gambhir and Dravid though avoided any further calamity for the hosts.

England’s previous best against the Indians was a total of 653, they had racked up against Mohammed Azharuddin s team at Lord’s in 1990.

Cook shared a 222-run fourth wicket stand with another left-hander, Eoin Morgan (104) who registered the second Test century of his yet nascent Test career.

The day had interruptions galore, twice rain ate 47 minutes from the opening session of two hours and later bad light twice held up the game once even when the floodlights were on.

England, who resumed at their overnight score of 456 for 3, never really pressed on the pedal and generally milked the Indian bowling for the total they desired.

In a start-and-stop kind of day, Tim Bresnan alone brought some urgency to the proceedings and made 53 from 75 balls inclusive of six fours and a six.

Morgan departed when he drove Raina uppishly into the covers. The left-hander batted for 237 minutes and hit 11 fours from 199 balls faced.

Indians would have been concerned by the sharp turn which Raina managed none worse than a delivery which once turned square and jumped over wicketkeeper Dhoni s left shoulder to go for four byes.

Mishra went on to pick two wickets from nine balls. Ravi Bopara (7) fell leg-before-wicket to him while Matt Prior (5) swept him into the hands of onrushing fine leg fielder, Sachin Tendulkar.

Praveen didn’t bowl for the better part of two sessions but a bigger sight was Suresh Raina turning his arms over for 28 overs a remarkable feat for a part-time off-spinner.