India on course for win after slip up

India on course for win after slip up

Virat Kohli and Gautam Gambhir were the two casualties for the side after the first Powerplay was bowled. Rather surprisingly, both had looked good for the time that they were there and when they got out, it seemed totally against the run of play. 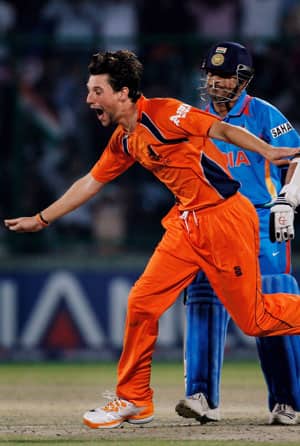 Virat Kohli and Gautam Gambhir were the two casualties for the side after the first Powerplay was bowled. Rather surprisingly, both had looked good for the time that they were there and when they got out, it seemed totally against the run of play.

On 12, Kohli missed a straight ball from captain Peter Borren and was bowled in the 15th over. This was followed by a good partnership between Gambhir and Yuvraj Singh, adding 40 from 52 deliveries.

Yuvraj looked to have retained his confidence while Gambhir made 28. However, Mudassar Bukhari got another straight ball down the leg-side to bowl Gambhir, surprising him and the quietening the Delhi crowd completely.

The Feroz Shah Kotla at Delhi may have been a track that plays a tad slower than most but the top Indian order clearly did not seem to think so. At the expense of sounding cocky, it was evident that the top-order wanted to finish the game off in a hurry to not only bag the two points but also get the runs quickly enough. Unfortunately, Pieter Seelar had other ideas.

After Virender Sehwag had begun in his customary fashion by hitting the first ball that he faced to the fence, Sachin Tendulkar followed with a boundary off the first he played as well. The two continued to play their strokes with Tendulkar sending ten Doeschate to the fence thrice in three balls of the fourth over.

At the other end, Sehwag took another three fours off the bowling Mudassar Bukhari and the Indians were 59 without loss after seven.

It was the introduction of Seelar that brought Netherlands back into the game as he first had Sehwag chopping the ball to the extra-cover and then Tendulkar holing out to long-on before the promoted Yusuf Pathan spooned a catch back to him.

Earlier India were 69 for no loss at one stage, before Pieter Seelar brought about a ripple by picking up three wickets in a space of 11 balls to push them back to 82 for three. Virender Sehwag tried to cut Seelar and was caught in the covers, Tendulakr lofted him but found a fielder in the deep while Pathan offered a simple catch back.

At the half-way mark, Netherlands had progressed well to 84 for two but the brilliant tactical move to bring on the pair of Zaheer Khan and Ashish Nehra for a short spell was enough to peg the Dutch back.

It all started with the wicket of Ryan ten Doeschate, who went for an expansive lofted shot off Yuvraj but only managed to spoon it to Zaheer at long-off. One got the sense that he was trying to hit over mid-on but had failed to do so.

This was followed by Ashish Nehra inducing an edge off Tom Cooper s (29) bat to the wicket-keeper and Zaheer Khan trapping Bas Zuiderent out lbw for a duck. Adding to the woes, Tom de Grooth was slow to respond to a call from Alexei Kervezee and was run-out. At the end of the 35th over, Netherlands were 112 for five.

After a short resistance from Peter Borren and Mudassar Bukhari, India wasted no time in removing the tail as Netherlands were bowled out for 189.

The Dutch had started off well in their first 15 overs of the game, progressing steadily to 56 without loss but the slow bowlers on a slowing pitch made life difficult for the batsmen.

Netherlands had Eric Szwarczynski come into the side in place of Bernard Loots and he opened the innings with Wesley Barresi. India, who decided to give Ashish Nehra a game instead of Munaf Patel, opened the bowling with him. However, looking at the manner in which the pitch behaved in the innings, captain MS Dhoni got in a spinner, Yusuf Pathan, in the fourth over of the match.

The openers got off to what was their best start of the tournament, getting 56 for the first wicket. Szwarczynski was then bowled off a Piyush Chawla googly for 28 (42 balls).

The other opening batsman Wesley Barresi departed soon after that for 26, declared out to the man of the match from the previous game Yuvraj Singh. Barresi challenged the review but the ball was hitting the stumps according to the HawkEye.

Netherlands had won the toss and decided to bat first on a track which was expected to help the spinners later. It surprised many experts to see Chawla continue to get a look-in over R Ashwin.

At the end of the 25th over, India were 140 for five and looking in a spot of trouble.