Ishant Sharma's 5 for 23 was the highlight of the second day of the three day warm-up game at Colombo.

India finish day Two of the three-day warm-up game against Sri Lanka Board President XI on Friday right on top. They were bowled out for a score of 351 but their bowlers, lead by Ishant Sharma ensured they remained on top as they got a huge lead of 230 runs. Indians then showed good intent as Virat Kohli and Rohit Sharma came out to bat. Both failed but India finished with a good score on board thanks to the stand between Cheteshwar Pujara and KL Rahul. India finished the day on a score of 112 for three after the end of 40 overs with a lead of 342 runs. Live cricket updates: India vs Sri Lanka President XI Day 2, India tour of Sri Lanka 2015

Rohit though flopped again getting trapped in front of the stumps for a score of eight. Kohli might be backing him but it is about time Rohit responded with a score. India tried a few combinations, Wriddhiman Saha came in at number three but fell for one and was followed by skipper Kohli to the dressing room for a score of 18. India were soon reduced to 28 for three and then the pair of Pujara and KL Rahul steadied India with a 50-run stand. The lead is over 300 runs already and India will wish to add few quick runs before unleashing their bowlers on the hosts.

Sri Lanka Board President XI were in trouble when they came up against a rampant Ishant Sharma who took five wickets in space of 21 balls for just four runs to reduce the hosts to 10 for five at one point of time. Varun Aaron then took a couple of wickets to give India firm control. The pair of Danushka Gunathilaka  and Nirsoshan Dickwella threatened to take the game away but the Indian spinners did the job to bowl them out for a score of 121; handing India a lead of 230 runs. Read: Ishant Sharma takes 5 wickets in 21 balls against Sri Lanka Board President XI

Earlier, India lost wickets in a flurry earlier in the day, with Kasun Rajitha taking five for . India will be happy with their work though on a greenish deck. It was the 134-run stand between Ajinkya Rahane and Cheteshwar Pujara that steadied India after the middle order had collapsed. Shikhar Dhawan and KL Rahul gave India an ideal start, adding 108 runs before the Rajitha struck India. Read: India 314/6 at stumps, Rahane scores hundred, Kohli flops on Day 1 India vs Sri Lanka President XI, India tour of Sri Lanka 2015 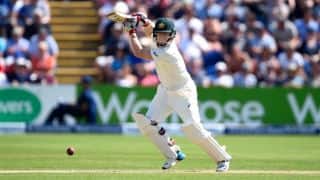