Heavy security has turned the Chinnaswamy stadium into a fortress for the first of the T20 matches between arch rivals India and Pakistan Dec 25. 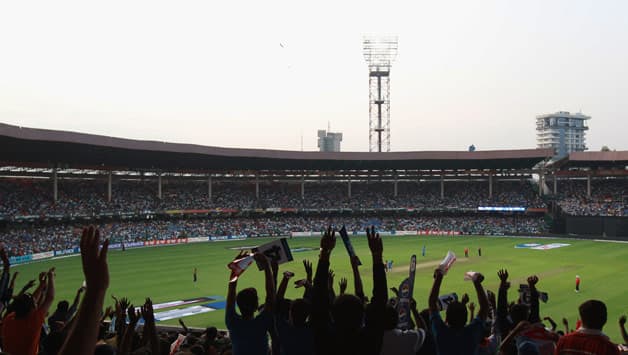 Heavy security has turned the Chinnaswamy Stadium into a fortress for the first of the T20 matches between arch rivals India and Pakistan Dec 25.

With the Karnataka State Cricket Association (KSCA) handing over the stadium to the city police Saturday for sanitising and securing it from any potential trouble, hundreds of police personnel moved in and around the venue.

About 5,000 police personnel will be deployed from Sunday in and around the stadium, along the 1 km route from the star hotel where the two teams will stay and the city centre where the venue is located.

“As maintaining law and order and providing security are our primary duty, we will take stern action against anyone trying to disrupt the match,” city Police Commissioner Jyotiprakash Mirji said Saturday.

Asserting that there would be no compromise on the security of players and spectators, the police chief told reporters that no protests or demonstrations would be allowed in and around the stadium from Sunday to Tuesday.

“As the governments of both the countries have agreed to hold the bilateral series, no organisation will be allowed to disrupt the match,” Mirji said.

The police chief made the observations in light of recent statements by the right-wing Hindu organisations like Shiv Sena and Sri Ram Sene threatening to disrupt the series between the two neighbouring countries.

In addition to heavy deployment, there will be round-the-clock surveillance from Sunday to Tuesday, with closed circuit televisions (CCTV) sets installed in and around the stadium, the players’ bus route and the hotel they stay.

“Vehicular traffic will be restricted and parking banned 1 km in and around the stadium on the match day from 11am to midnight. A bomb squad and a dog squad will be engaged to prevent any untoward incident,” Mirji said.

To prevent disruption and unruly behaviour in the stadium during the match, fans will not be allowed to take articles like bags, food items and even water bottles.

“Fans will be frisked more this time at the entrance to ensure they do not carry any harmful object into the stands.”

The stringent security measures are being taken in the backdrop of two low-intensity blasts outside the stadium April 17, 2010 before IPL T20 league tie between Royal Challengers Bangalore (RCB) and Mumbai Indians (MI) began.

Though there was no death, eight people, including three policemen were injured in the incident.

Pakistan is playing in India for the first time post-26/11 Mumbai terror attacks.

Last time Pakistan played in Bangalore was Dec 8-12, 2007 when the Third Test was drawn.

The previous occasion the two teams met was in the ICC T20 World Cup Sept 30, 2012 in Colombo when India won by eight wickets.

Last time India and Pakistan played an ODI in Bangalore was April 4, 1999 when India lost by 123 runs.