India registered a 58-run victory to go 2-0 up in the five-match One-Day International (ODI) series against Zimbabwe on Friday at Harare. 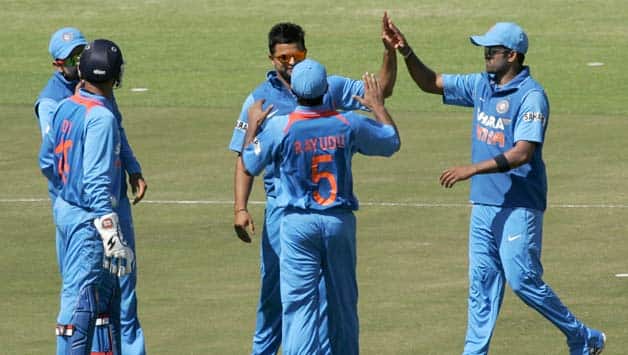 India registered a 58-run victory over Zimbabwe to go 2-0 up in the five-match One-Day International (ODI) series on Friday at Harare.

Despite starting the game on a positive note, the home side faltered in their basics and in the end, had too big a total to chase down. India’s bowling was good enough to see off the hosts from causing an upset but Kohli would have liked to wrap things up earlier. Jaydev Unadkat (four for 41) was the pick of the bowlers with Amit Mishra and Ravindra Jadeja chipping in with wickets as well. For the hosts, Vusi Sibanda’s (55), Elton Chigumbura (46) and Prosper Utseya (52) gave a shimmer of hope for the underdogs to level the series.

Chasing a cyclopean total of 295, Zimbabwe openers showed a positive intent and looked for a big partnership early on. They added 45 runs before India’s first-change bowler Jaydev Unadkat struck. Unadkat bowled at a good line and length and did not let the batsmen score freely. With the asking rate climbing by the minute, Sikandar Raza decided to take the attack to Unadkat. He attempted a pull off a short delivery but the ball went off the toe-end of the bat to Shikhar Dhawan, who showed no signs of fatigue after a gallant century in the first essay. He covered a lot of ground before taking a catch at mid-wicket.

Hamilton Masakadza joined Vusi Sibanda in the middle and put on another good partnership, this time over 50 runs to keep Zimbabwe in the game. They looked to score a boundary from each over and even punished Vinay Kumar for his mediocre line and length. Sibanda slammed him for a six over backward square leg and followed it up with a boundary past the mid-off fielder. He finished the over by shuffling across and hoisting it to the square leg fence.

Skipper Virat Kohli rotated his bowlers well to keep the batsmen on their toes as Zimbabwe refused to give up. They were still way behind on the asking rate but kept the scoreboard ticking and did not let the Indians to kill the game early. Sibanda attacked Amit Mishra who was bowling a lot of short deliveries and giving the batsman enough time to negate the spin. When Mishra tossed one up out of the blue, Sibanda used all his might to pick it up from outside the off-stump to hit it for a six over long on to reach his half-century in style. Sibanda and Masakadza added 64 runs from 57 deliveries before a breakthrough arrived.

Just when the duo was starting to settle down, Kohli brought back Unadkat and the move worked instantly. Unadkat started with a short delivery to Sibanda who failed to clear Amit Mishra at deep midwicket. He fell for 55 from 65 deliveries. At this stage, Zimbabwe were 109 for two in the 21st over.

Skipper Brendon Taylor walked out with the entire nation’s hopes of orchestrating an upset on his broad shoulders. But that was out of question within moments of his arrival as a hesitant attempt to take a quick single resulted in Taylor’s run out in the same over. In a matter of deliveries, Zimbabwe went from 109 for one to 109 for three, almost effectively taking the sting out of their attempted chase.

Masakadza hardly believed so. He batted on even as Shami Ahmed returned to the attack and strangled him and the new man, Sean Williams at the crease to dry up the runs. With Shami and Unadkat operating from either ends, the runs were hard to come by and the asking rate was mounting at an alarming rate. Kohli seemed to have noticed the batsmen’s desperation and set up a trap by bring back Jadeja into the attack. Hoping to get a breather, Williams attempted a reverse-sweep off the very first delivery and was trapped plumb in front.

Malcolm Waller walked out with the score at 127 for four in the 27th over. But, Zimbabwe suffered another setback as a set Masakadza threw his wicket away. Mishra was lucky to get a wicket off a half-tracker when Masakadza failed to clear Shami Ahmed when he tried to play an aerial shot over short fine leg. He departed for 34.

Elton Chigumbura walked out but couldn’t garner a big partnership as Mishra dismissed Waller. Waller attempted a sweep and Mishra struck with another googly. He used three googlies to pick up as many wickets in the first ODI and he unleashed another lethal one to send back Waller. Zimbabwe were down 133 for six in the 31st over.

Prosper Utseya and Chigumbura came together and hoped to keep their side alive with some quick runs in the powerplay overs. However, they couldn’t do something out of the ordinary as they added just 22 runs in the five-over period. At the end of the powerplay, they needed 118 runs from the last 60 deliveries.

Utseya and Chigumbura went after the bowling but it was too much to ask for in the end. Shami Ahmed picked up his wicket of the game when Chigumbura edged a delivery straight into the hands of Dinesh Karthik to depart for a valiant 46. In the dying moments, Utseya gave the sparse home crowd something to cheer about as he got his half-century with back-to-back boundaries of Shami Ahmed. His knock came in 60 deliveries.