India's bowlers came back from an early pasting to restrict Australia to 160 for 6 in Match 31 of ICC T20 World Cup 2016 at Mohali on Sunday.

India’s bowlers came back from an early pasting to restrict Australia to 160 for 6 in Match 31 of ICC T20 World Cup 2016 at Mohali on Sunday. Usman Khawaja and Aaron Finch got Australia off to a flying start, thrashing 54 runs in just over 4 overs before the first wicket fell. Khawaja was belligerent in particular, smashing 6 fours in his inninngs including 4 off one Jasprit Bumrah over. He was finally out edging Ashish Nehra behind to MS Dhoni for a 16-ball 26. That proved to be India’s way back, as the run rate dropped drastically after that. LIVE CRICKET SCORECARD: India vs Australia, Super 10 Group 2, Match 31 at Mohali.

David Warner came in at No. 3, ahead of Steven Smith. Ravichandran Ashwin, who had been smacked for 22 runs in his first over, bowled the ideal off-spinner to the left-handed batsman; Warner was drawn forward, the ball spun past his outside edge, and Dhoni whipped off the bails. Australia were now 72 for 2. Ashwin had had his revenge after the expensive first over. It was also his 50th T20I wicket. LIVE CRICKET UPDATES: India vs Australia, Super 10 Group 2, Match 31 at Mohali

Yograj Singh had launched a tirade against Dhoni ahead of the match for what he called an unfair under-use of his son Yuvraj Singh. Yograj had said that Dhoni is deliberately under-bowling Yuvraj in helpful conditions. Whether or not Dhoni read about those comments may not be known, but he ended up giving the ball to Yuvraj in the 10th over. Yuvraj struck with his very first ball, getting Steven Smith caught behind for 2. READ: Yograj Singh to MS Dhoni: What the f*** is happening?

Aaron Finch was the next to go, trying to pull Hardik Pandya but not getting it off the middle of the bat. Shikhar Dhawan at midwicket accepted the catch comfortably. Finch had top-scored with 43 off 34 balls, having hit 3 fours and 2 sixes. With his dismissal Australia were 100 for 4. Glenn Maxwell had taken his time early on, scoring just 17 off his first 20 balls before opening up with a four and a six. He was done in by a slower ball from Jasprit Bumrah, bowled for 31 off 28 balls.

Nehra bowled a superb 18th over, conceding a mere 4 runs to Shane Watson and James Faulkner. Bumrah, who had conceded 17 off his first over, conceded only 15 off his next 3 overs to finish with figures of 1 for 32. Pandya bowled the final over and conceded 15 off the final over while also picking up a wicket, as Australia finished at 160 for 6 — a mediocre score given their excellent start. 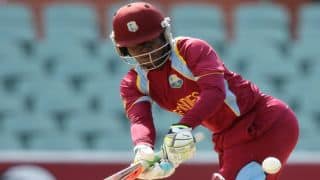