India dismissed South Africa for 335 at Centurion. South Africa‘s lower order showed resistance to add 89 runs, and were helped by India’s sloppy fielding. Nonetheless, Ishant Sharma’s three-for and Ravichandran Ashwin’s four wickets limited the total under 350. Indian openers played an over before lunch, adding four runs on the board.

Resuming at 269 for 6, South Africa relied on Faf du Plessis and Keshav Maharaj. The duo wanted to see off the new ball. They looked keen to apply themselves, but Maharaj departed for 18. A length delivery, off Mohammed Shami, found a thick edge off the right-hander. Shami thus joined the likes of Kapil Dev, Zaheer Khan, Javagal Srinath, Ishant Sharma, Irfan Pathan and Karsan Gharvi to attain 100 scalps.

Note: Shami became the 21st Indian and overall 183rd player to the landmark.

Faf continued from his end. He understood the need of the hour to score as many runs and stitched vital stands with the tail. Indian fielders assisted the South Africans by dropping sitters. Kagiso Rabada was given two consecutive reprieves off Ashwin. The first one was dropped by Virat Kohli at first slip, and the other was a mix-up between Hardik Pandya and Shami. The latter was more at fault for not making a call.

Seeing the confusion, Kohli did what he does best. He may have mouthed a few words in frustration.

South Africa continued to ride on luck. India, on the other hand, conceded a breather to Faf. It again came off Ashwin’s delivery. He would have scalped a five-for had Parthiv Patel held onto a clear edge. Rabada finally ran out of fortune on 11. He pulled towards deep mid wicket, and Pandya took a tough chance. Ishant struck.

India wrapped up the innings following Faf’s departure. The skipper fell for 63 to a fuller delivery with some inward movement, and Faf went for a flick. Result: his stumps were rattled.

Ashwin took the last wicket, dismissing Morne Morkel for 6. India, despite their poor fielding, would be relieved to dismiss South Africa from 246 for 3 to 335 all-out.

India batsmen have their task cut out against Rabada, Vernon Philander, Morkel, Rabada and Lungisani Ngidi. South Africa’s lower-order resistance may prove too much if India lose quick wickets. 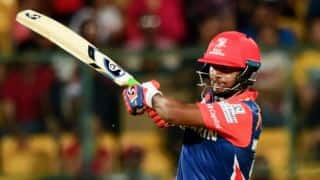 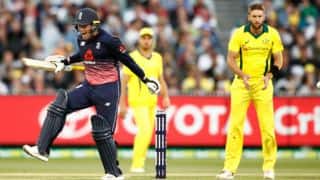