India marched into the World Cup final for the first time on home turf, hammering Pakistan by 29 runs in the semifinal match at the Punjab Cricket Association Stadium in Mohali. Pakistan were all out for 231 in 49.5 overs. 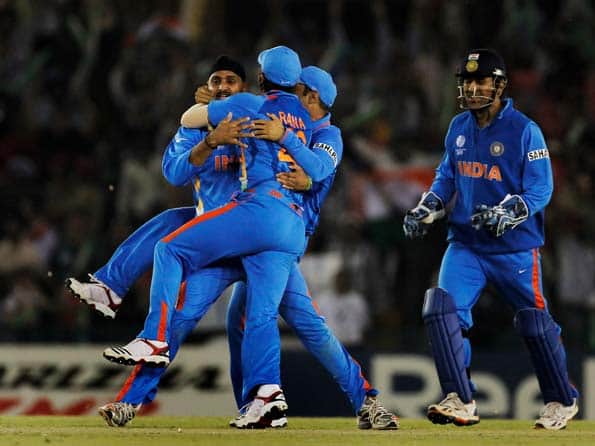 Yuvraj Singh brought India back into the game with two crucial wickets of Younis Khan and Asad Shafiq in their World Cup semi-final match against Pakistan at Mohali.

The left-arm spinner first had Asad for 30 before accounting for Younis for 13 to push the men in green on the backfoot.

Indian bowlers, backed by some sharp fielding, didn t allow the Pakistan batsmen to score freely after Mohammad Hafeez s dismissal. Even the ones and twos dried up and the pressure began to show on Shafiq as he bowled by Yuvraj while attempting a forceful shot. This was after he and Younis took Pakistan past the100-run mark.

Hafeez seemed to be at ease against the Indian bowlers and looked good for a big one until he was caught behind by Mahendra Singh Dhoni off Munaf. He banged seven boundaries in his 59-ball knock.

Hafeez and Asad Shafiq maintained the momentum after Zaheer Khan removed Kamran Akmal in the ninth over. Akmal, attempted to belt a wide delivery off Zaheer but, was pouched by Yuvraj Singh at point for 19.

Akmal clubbed two boundaries in the first over of Zaheer Khan to provide Pakistan a positive start in pursuit of 261 for victory in their World Cup semi-final game against India at the Punjab Cricket Association Stadium in Mohali.

Earlier, Wahab Riaz s career-best 5-46 helped Pakistan restrict India to 260 for nine from their allotted 50 overs. Sachin Tendulkar missed out on his 100th international century and was dismissed for 85.