Senior Indian batsman Rahul Dravid, who scored his second consecutive century in the second Test against England on Saturday, said that he was "sort of frustrated" with the way the visitors collapsed after being in a strong position. 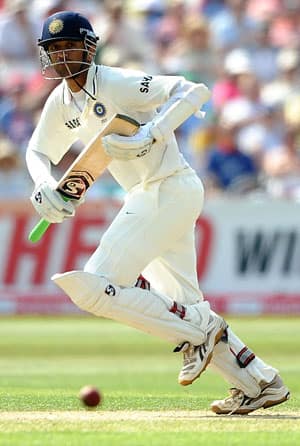 Senior Indian batsman Rahul Dravid, who scored his second consecutive century in the second Test against England on Saturday, said that he was “sort of frustrated” with the way the visitors collapsed after being in a strong position.

Dravid (117) notched up his 34th century to equal Sunil Gavaskar’s record but India lost six wickets for a mere 21 runs to be all out for 288 in their first innings and Dravid rued that India had let slipped the chance to take control of the Test.

“It was sort of frustrating at the way we played. Look we were 267 for four but were reduced to 273 for eight,” said Dravid who became the joint highest Indian century maker in Test cricket with Gavaskar.

“We had them 124 for eight yesterday and today we were 267 for four and we collapsed. In a tight game, on a tough wicket in a low-scoring game, these things are important.

It’s 50-50, even-stevens now,” said Dravid after India could finish with only 67 runs in front after promising much more on the second day on Saturday.

“We would like to chase as few a runs as feasible. We got to bowl in right areas and restrict them as low as possible.

Irrespective of what the number is, we should look to win this Test,” he said.

Dravid said he had to face some critical moments during his 117-run knock when right wrist was hit while he was on 30 by a short delivery.

“That hurt the right wrist, it spasmed for 5-6 overs. It was bit of a tricky period and for sometime I did not have much feeling in my right hand.

“Once we got through to lunch, it eased out. It is still paining but not much. Towards the end, I was cramping up as it was a hot day and I was on field for long time,” he revealed.

The right-handed batsman was out in an uncharacteristic manner on Saturday when he threw his bat at a wide delivery from Tim Bresnan and was caught at third man.

“If Harbhajan was there, I would have played normally. I saw these guys (Broad and Swann) come in and (aggression) worked for them. Unfortunately, the first time I tried, it went straight to hands. I wanted to be positive and get 20-25 runs quickly. In low-scoring game, these runs are important.”

“It was not easy for the guys though. The pitch was difficult to bat and the guys tried their best. We need to pull our socks and come up with some strong performance in the remaining three days,” he said.

Dravid batted for more than six hours at the middle to anchor the Indian innings but said he was “pleasantly weary” after his performance.

“It was tough conditions out there. It was a hot day. I had slight cramps towards the end of my innings. But I would say I am not tired but pleasantly weary,” said the 38-year-old Indian batting mainstay.

“At the back of my mind, I think there is a lot of play left in the Test. We need strong performance in the remaining three days,” he said.