India skipper Mahendra Singh Dhoni saluted his lower order batsmen for bailing out the side from tough situations and shaping team's 63-run win over the West Indies in the first cricket Test. 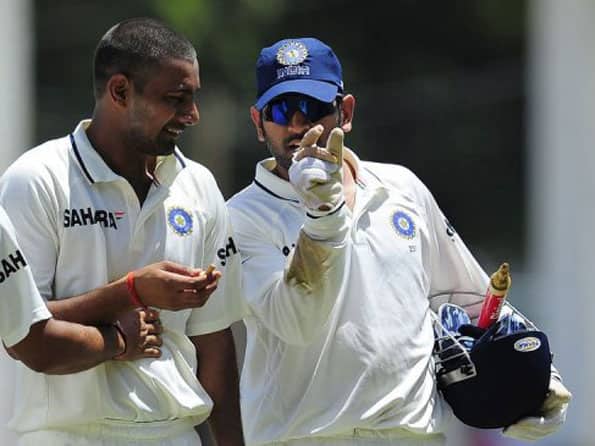 India skipper Mahendra Singh Dhoni saluted his lower order batsmen for bailing out the side from tough situations and shaping team’s 63-run win over the West Indies in the first cricket Test.

Harbhajan Singh and Suresh Raina had shared a 146-run seventh-wicket stand in the first innings after India had slipped to 85 for six and then in the second innings Amit Mishra combined with Rahul Dravid to put on 56 runs for the ninth wicket to help stretch the lead beyond 300 runs.

“Our lower half batsmen for the past year and a half have been contributing well. We were 85 for 6 in the first innings before Harbhajan, along with Suresh Raina, bailed us out. In the second innings, Mishra made a telling contribution,” Dhoni said at the post match press conference.

“But for that stand (Raina and Harbhajan), we could have been all out for 150. We were able to get more runs and thus gather a handy lead. Then in the second innings, we could stretch the lead to 300 plus,” he added.

Dhoni also offered a wholesome appreciation to the veteran batsman Dravid, who scored 112 in the second innings, and paceman Praveen Kumar, who took six wickets on debut.

“Dravid has been an exceptional batsman. That he played over 250 deliveries showed he was very patient. He made the bowlers pitch in his areas and was brilliant.

“Praveen is a very skillful bowler and can swing it either way. He doesn’t have the pace but he can swing the ball and confuse the batsmen if they needed to play or leave a delivery. He showed great character after having been stopped from bowling in the first innings.

“When you are switching from 10-over format to 20-25 overs in an innings, you have to be careful. Importantly, he backed his strength and picked up wickets in the second innings as well.”

Praveen Kumar picked up three for 42 in the second innings, to go with his three for 38 from the first, for the match figures of six for 80.

West Indies were all out for 262 in the second innings which was way short of 326-run target but Dhoni felt his side gave away too many deliveries to cut.

“In the first innings, both sides bowled tight and there were not many deliveries to cut. In the second innings, both the sides were lenient. It was slightly different wicket.Unless you bowled really bad, it was difficult to score.”

India offered Test caps to two young batsmen — opener Abhinav Mukund and Virat Kohli — in the Test and Dhoni urged them to quickly adapt to the environment of Test cricket.

“The short ball talk has been on for some time. In international cricket, you have to consistently face it. You need to adapt, you may not be the best player of fast bowling but if you can negotiate it, even if you don?t look elegant, it’s fair enough.

“It’s important you are enjoying your cricket for when you do it, it helps you perform better.”

Dhoni found merit in young Mukund and said it was imperative the team had a pool of openers.

“It’s important to have a pool of openers. It’s important they are given exposure in India A sides for you come to play against teams which has players who one day would represent their respective national sides.”

Dhoni also made an encouraging remark on the home team by commenting their top order was as good as his own side.

“I will not make the mistake by saying that this opposition is not good enough. Every batsman can score runs.

Their first seven batters have the talent which equally matches the one of current Indian team.”

Kiwis to host Zimbabwe after 11 years