Mustafizur Rahman got smashed for a couple of sixes in the sixth over, but came back strong to dismiss Rohit Sharma.

India have scored 42 for 1 against Bangladesh in the powerplay period of the T20 World Cup 2016 clash at Bangalore. Shikhar Dhawan and Rohit Sharma opened the batting and were looking to play cautiously early on in order to learn the nature of the surface, lest they get out to a silly shot. The first couple of overs bowled by Mashrafe Mortaza and Shuvagata Hon, brought India just nine runs, which is low by Twenty20 standards. They tried to up the scoring in the overs thereafter, but the strategy by Mortaza to shuffle bowlers after one over spells worked well and India were kept in check. Shakib Al Hasan almost induced a chance to get Rohit Sharma dismissed, but the return catch fell just short. FULL CRICKET SCORECARD: India vs Bangladesh, T2o World Cup 2016, Match 25 at Bengaluru

The batsmen finally got going in the sixth over, when Mustafizur Rahman erred in line by going full and was duly hit over long off and midwicket by Rohit and Dhawan in that order. However Rohit was dismissed later in the same over, falling prey to one of Mustafizur’s canny variations.

Earlier Bangladesh won the toss and elected to bowl first on the Bangalore surface. Mortaza said the decision was influenced by the outcome of the previous game, where Australia had won the game against Bangladesh chasing. According to Mortaza, the pitch will hold up a little bit and if they can keep India down to a low score, they’ll be able to chase accordingly. Bangladesh will look to break the underdogs tag and beat India in a bid to keep their qualification hopes alive. For India a win will be important to boost their chances, although loss will not entirely rule them out of contention.

Video: MS Dhoni plays Holi with fans ahead of India vs Bangladesh match 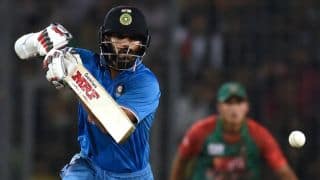