India left it late, but eventually went past the line in their chase of 133 in the third Test against Australia with 15 balls left. 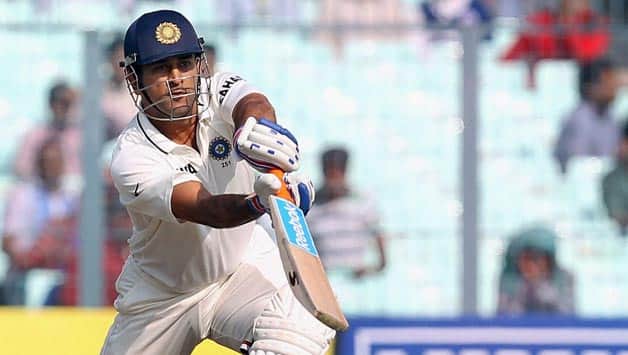 MS Dhoni was unbeaten on 18 off 28 balls, 12 of which came from the last three balls of the innings © PTI

India left it late, but eventually went past the line in their chase of 133 in the third Test against Australia with 15 balls to spare.

The hosts looked set for a comfortable win with Virat Kohli (34) and Sachin Tendulkar (21) patiently going about the chase after the departures of Murali Vijay (26) and Cheteshwar Pujara (38). At 103 for two and about 10 overs to go to get 30 runs, the spectators at the PCA stadium wouldn’t have expected as tense a finish as they got.

Kohli played a loose shot to Peter Siddle (one for 34) and lost his wicket for a well-made 34. In walked Dhoni, the cool finisher. The Indian captain took his image a bit too far as he reduced the equation to 25 from 36 balls.

Eight more runs were added at the cost of 12 balls. Tendulkar then embarked on a suicidal run that never was and David Warner, one of the finest fielders in world cricket, made him pay with a Jonty Rhodes-esque run from short cover and lunge towards the stumps. 116 for four; seventeen runs required off 23 balls.

Ravindra Jadeja, the star with the ball, walked in at No 6. He had come into the Test side as a batting all-rounder, but will leave it having switched his primary craft. The 24-year-old came in with a purpose and eased the nerves of the crowd by lofting Siddle for four over mid-off and followed it up with a swat straight down the ground. Nine to win from 18.

It was here that Dhoni, on six off 25 balls, decided that he had had enough. Perhaps it was Jadeja’s aggression that gave the 33-year-old Indian skipper the confidence. Whatever it was, Dhoni ended the match in the next three balls with three powerful hits for four.

As the Indian dressing room erupted along with the partisan crowd, Dhoni calmly picked up a stump as a souvenir to a record-breaking win. The result meant that India took an unassailable 3-0 lead in the Border Gavaskar Trophy, which also was the first time that they won more than three Tests in a series against Australia.

Earlier, Jadeja and the rest of the Indian spinners ensured that India were set a 133-run target with Australia being bowled out for 223 in their second innings.

The hosts gave themselves a minimum of 27 overs to chase down their target and they had to do it without the services of Shikhar Dhawan, who had injured his hand.

All seven Australian wickets to fall on the day were shared between Ravichandran Ashwin, Ravindra Jadeja and Pragyan Ojha, who produced an inspired performance.

From 75 for three at the start of play, Australia were reduced to 179 for nine before Mitchell Starc and Xavier Doherty embarked on a gritty, frustrating last-wicket partnership.

The duo added 44 runs in 18.1 overs before Jadeja wrapped up the innings with the Australians on 223.

Earlier, Ojha dismissed nightwatchman Nathan Lyon (18) within the first 20 minutes of the day. The left-arm spinner’s delivery from around the wicket pitched on middle and spun enough to find the faintest of edges off Lyon’s bat, as skipper MS Dhoni snapped it up behind the sticks.

Mitchell Starc, who went agonisingly close to scoring a maiden Test century in Australia’s first innings, then stuck around with the experienced Brad Haddin till lunch was called.