India Series Next Year Will Be Mouth-Watering: Tim Paine

India Series Next Year Will Be Mouth-Watering: Tim Paine

Having overcome their struggling phase, Australia are eagerly awaiting for India next year, a series that Tim Paine termed as a 'mouth-watering' affair.

Australia Test captain Tim Paine has seen his team’s fortunes take a massive turnaround since last year in January when India returned home with a maiden red-ball series win from the country.

The absence of Steve Smith and David Warner due to ball-tampering bans, below-par performance of lead-strike bowler Mitchell Starc and a collective batting failure left Paine’s team in a desperate state. However, since then the return of Smith and Warner alongside the rise of new batting stars of the likes of Marnus Labuschagne combined with a fiery pace attack has seen them secure five straight Test wins at home.

Having overcome their struggling phase, Australia are eagerly awaiting for India next year, a series that Paine termed as a ‘mouth-watering’ affair. “If we go to Bangladesh and play well and get some wins over there, then we come back to Australia playing India, and that’s a pretty mouth-watering series for players and for fans,” Paine was quoted as saying by cricket.com.au.

However, Paine isn’t looking at the series as a chance to exact revenge. “I certainly won’t be looking at it as revenge,” he said. “We’re certainly a different side from what they played against here last year, and there’s more at stake there’s World Test Championship points at stake. Both of the two teams, Australia and India, are eyeing off that final so every point is going to be critical.”

He added, “If we can continue our upward trend that we’ve shown in the last 12 months, then you’re potentially looking at the top couple of sides, or teams that are in the top two or three, in the world. It’s going to be an awesome series. I think they (India) showed last year they’ve got a pace battery that’s going to be every bit as good as ours so it’s going to be one to watch.”

Paine took over the Test captaincy during what was a troubled time for Australian cricket and that reflected on their performances on the field. A year later, things are much better with Paine ‘a lot happier’ now. “But I’d say that last year I still felt quite optimistic, and realistic. We had some quality players out of our team, and I remember saying at the time that had you taken two of India’s best batters out of their side, the result would have been the other way around.” India vs Sri Lanka, 2nd T20I, LIVE streaming: Teams, time in IST and where to watch on TV and online in India on January 7 at Holkar Stadium, Indore at 7:00 PM IST 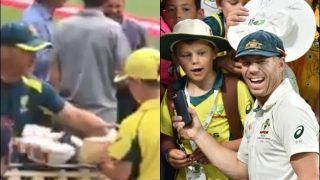