India will host the second edition of Deaf ICC T20 World Cup from November 23-30 in Gurugram.

The teams will be placed in two groups with each team playing three matches in the first stage. The top two teams from each group will progress to the semifinals.

The tournament is being organised by Deaf Cricket Society (DCS) which is responsible for the governing, hosting and promotion of the game in India.

“Cricket is still one of the most popular sports played and watched in the country. In 2017 alone, the sport enjoyed 717 million TV viewers and around 27 billion impressions per week. Today we are confident that disability sport such as cricket will gain momentum and support by this world class tournament being held in India,” General Secretary, DCS, Sumit Jain, said in a release on Thursday.

Stefan Pichowski, Chairman, Deaf ICC said: “We are delighted that India is hosting the second edition of Deaf-ICC World Cup T20. The enthusiasm from the teams across the world is overwhelming and the visit to India will be very special as it is known for promoting the spirit of cricket.” 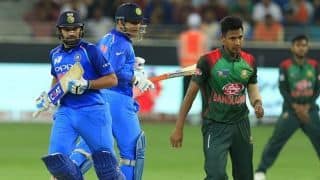