Batting legend VVS Laxman has pointed our three main areas of concerns for the Indian team which they have to address in order to gain an upperhand against Australia.

Batting legend VVS Laxman has pointed our three main areas of concerns for the Indian team which they have to address in order to gain an upperhand against Australia in the third Test that starts from Wednesday at the Melbourne Cricket Ground (MCG).

The continual failure of openers to give India a solid platform, batsmen unable to convert good starts into innings of significance and allowing the opposition tail-enders to score handy runs are the three main issues for the Virat Kohli s top-ranked India as per Laxman.

The way I see it, there are three areas that India must address without delay, Laxman wrote in his column for The Times of India. The first is the prolonged drought of the opening pair. The second is the inability of the set batsmen to kick on and notch up hundreds. The third is allowing the lower order to score handy, often decisive runs.

To tackle their opening woes, India have taken the first step. On Tuesday, they announced their playing XI for the third Test which sees Murali Vijay and KL Rahul being dropped. Mayank Agarwal will make his prolonged debut as the new opener and will be joined by Hanuma Vihari who has been promoted up the order.

Explaining why Agarwal should be given a go, Laxman wrote, He has brought down doors through sheer determination, commitment and weight of runs, both for Karnataka and for India A, and has served his apprenticeship long enough. He comes with freshness and positivity, and without the baggage that someone like KL Rahul is carrying.

Some time away from Test cricket, will help Rahul in clearing his mind and regain the confidence. I can sense a massive lack of confidence. The manner of his dismissals too have been quite similar. I am of the opinion that a break to clear up his mind will do wonders for the vastly gifted young man, he wrote. 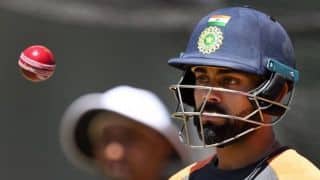 Won’t carry banner to explain who I am: Virat Kohli on his public image