The pitch of the New Wanderers Stadium, Johannesburg was already criticised by many on social media and on air by Michael Holding who rated the pitch 2 out of 100.

The Day Three of the third Test had a very dramatic ending as a short pitched ball by Jasprit Bumrah hit Dean Elgar on the gap between the grill. Elgar had taken a few blows before this was seen uncomfortable after the ball hit the helmet. The Match referee Andy Pycroft came on field to discuss with umpires and soon both the captains were called to discuss on the issue.

Sunil Gavaskar on air said that there were uncertainty in the pitch but the ball which created all the drama was fine. The ball was seen pitching short of a length and bounced as much as it should but Elgar failed to pick it up. Gavaskar also pointed out that if only the ball would have pitched on good length and bounced to that height then the objection was fair. Later Gavaskar even compared the situation with keeping India at South Africa’s position.

If India were batting, chasing 241 runs in the fourth innings, and if the Indian team were disconsolate (with the awkward bounce of the pitch), they would have been called sissies. They would have been called sissies, because unfortunately, India has this reputation. Despite the Kohlis, the Tendulkars, the Dravids, the Sehwags, the Laxmans, they have got a reputation that on a fast and bouncy pitch, they don t travel well, said Gavaskar.

The play has been called off following Elgar’s case. The play is still willing to happen but the umpires will take a final call on it. The decision will be taken tomorrow morning before the play. 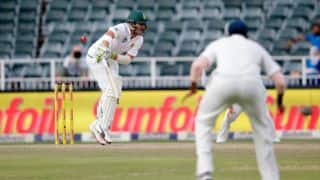 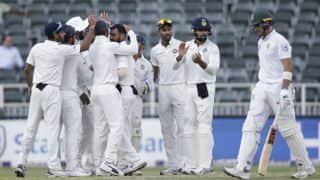