The selection committee will pick the squad for the remaining ODIs vs Sri Lanka instead.

The national selection committee of the Board of Control for Cricket in India (BCCI) has stated that the Indian team for the last couple of matches of the ongoing five-match One-Day International (ODI) series against Sri Lanka will be picked on Tuesday. The board however, did not specify a date for the announcement of the squad that is to tour Australia in December, although they did not rule out the likelihood of discussing the possible line up at the meet.

One of the biggest concerns for the selectors will be that of Varun Aaron‘s fitness, after the pacer tore his quadriceps during the first ODI against Sri Lanka at Cuttack. “The team landed in Ahmedabad on Monday evening and Aaron was taken to a hospital for medical tests. Reports will come tomorrow morning and we’ve to wait till then,” a source close to the team was quoted as saying to the Indian Express.

MS Dhoni‘s fitness will also be in discussion, as the Indian skipper is said to have issues with his forearm. The last ODI of the India-Sri Lanka series is scheduled to be played in Ranchi, Dhoni’s hometown.

The selectors are also considering the inclusion of Rohit Sharma for the last two ODIs. Sharma, who broke his finger during the India-England ODI series in England earlier in the year, was ruled out of the recent ODI series against West Indies, as well as the ongoing bilateral engagements. The 27-year-old made his comeback however, with a century for India A against Sri Lanka in a warm-up match at the Brabourne Stadium in Mumbai recently. 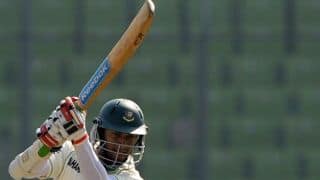 Bangladesh 406/7 against Zimbabwe at tea on Day 2