In the pursuit of 169 runs, India started the chase with caution as Zimbabwe bowlers produced lateral movement. After 10 overs, India were 27 for 1.

In the pursuit of 169 runs, India started the chase with caution as Zimbabwe bowlers produced lateral movement. Debutants KL Rahul and Karun Nair tried to break the shackles, as they failed to find feet against Zimbabwe’s bowling attack. Nair bagged his first boundary by sublimely timing it past extra cover. However, his maiden innings was cut short by Tendai Chatara. It was soft dismissal as he tried to spank short and wide delivery over the infield, but ended up holing out to Sikandar Raza at extra cover. Ambati Rayudu joined KL Rahul in the middle to keep the scoreboard ticking. Live Cricket Scorecard: Zimbabwe vs India, IPL 2016, 1st ODI match, at Harare

Rayudu smartly kept giving strike to Rahul, and let him take control of the chase. After 10 overs, India were 27 for 1. They need 142 off 240 balls. Earlier, Team India’s young and fiery bowling unit displayed a stellar performance to bundle out Zimbabwe for 168 in first ODI at Harare. Jasprit Bumrah was pick of the bowlers, as inexperienced Zimbabwe batsmen failed to read his sling-shot action. He scalped 4 wickets, conceding only 28 runs. Earlier, MS Dhoni read the conditions well and didn’t hesitate to bowl first.

The decision paid off as the duo of Dhawal Kulkarni and Barinder Sran bowled in the right channel, not letting the hosts break the shackles. Sran made early inroads as he trapped Peter Moor plumb in front of the middle-stump.

Elton Chigumbura kept the innings ticking despite losing wickets at the other end. His 41-run knock helped Zimbabwe post a modest 168 on the scoreboard. 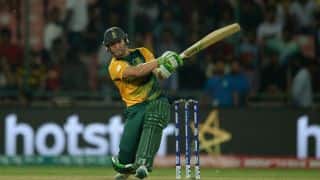