India strike twice after declaring at 631 for 7

India strike twice after declaring at 631 for 7

VVS Laxman continued his love affair with the Eden Gardens with an unbeaten 176 and Mahendra Singh Dhoni slammed a century as India buried a hapless West Indies under a mountain of runs to take complete control of the second Test. 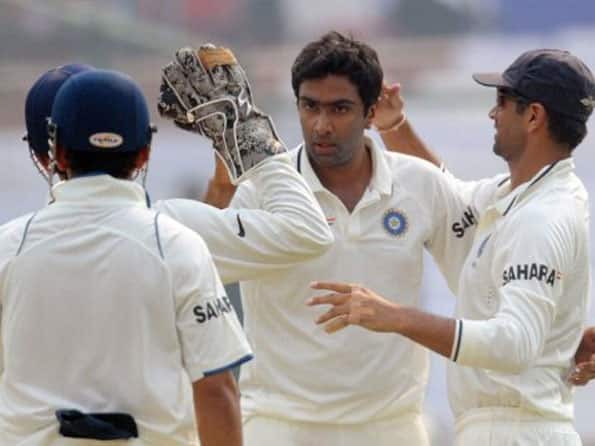 VVS Laxman continued his love affair with the Eden Gardens with an unbeaten 176 and Mahendra Singh Dhoni slammed a century as India buried a hapless West Indies under a mountain of runs to take complete control of the second Test.

Laxman produced yet another classy knock at his favorite ground where he averages an astounding 110, while Dhoni struck a belligerent 144 (175b, 10×4, 5×6) to record his first century in 21 months as India declared their first innings at a colossal 631 for seven in the post-tea session.

The hosts then dismissed both the West Indies openers to reduce the visitors to a shaky 34 for two before the second day’s play was called 50 minutes early because of bad light.

West Indies are trailing by 597 runs.

Laxman and Dhoni stiched 224 runs together for the seventh wicket in an alliance that put India in complete command on what looked to be a good batting track.

Such was the batting domination by India that the hosts had one two-hundred plus, one-hundred plus and four half-century partnerships with Laxman in the middle in three of them.

Indian bowlers did well to claim the early wickets with Umesh Yadav and Ravichandran Ashwin taking one wicket each.

Yadav gave the breakthrough when he had the wicket of comeback-man Adrian Barath (1) who was caught at the second slip by Virender Sehwag in the second over with West Indies 3/1.

Newly-married R Ashwin took the other opener in Kraigg Brathwaite (17) in the 12th over of the day which became the last over as the play was called off because of bad light.

Play will start half an hour early tomorrow.

Riding on Dhoni’s knock, India scored a quickfire 180 runs to cruise past 600 in the most fruitful second session of two hour and ten minutes, something that helped the hosts consolidate their position.

The batting-friendly Eden strip once again witnessed a feast of runs by India who got past the 600-barrier for the first time after 14 months.

The last time India got past 600 was in July 2010 when they had scored 707 against Sri Lanka in a drawn Test match in Colombo.

The same year in an earlier series against South Africa, India had declared for 657 for seven at the same venue for a win in a match seven batsmen scored centuries including two by Hashim Amla.

Incidentally Dhoni’s last century also had come in the same match at the same venue 21 months ago.

After being lucky on 13 and 16 when he edged twice to Kemar Roach but only in no balls, Dhoni never seemed to be in any trouble with the West Indies bowlers running for covers.

Dhoni was particularly ruthless of Brathwaite hitting the part-time off-spinner for two sixes and a boundary to notch 19 runs in the same over.

The skipper reached his fifth Test century by driving a full toss to long off from Brathwaite, something that brought an end to the long drought.

There were several new records in the match as Laxman continued his tryst at the Eden.

It was a frustrating day for the West Indies bowlers who struggled with just one regular spinner in leggie Devendra Bishoo. With Dhoni in full flow part-time spinners Kraigg Brathwaite and Marlon Samuels only made the task simpler.

Dhoni got out in the first over after tea when he had another expansive cut of Roach but this time it was not a no-ball with wicketkeeper Baugh finishing a regulation catch.

Earlier, resuming at 346 for five, India began with equal flair as Yuvraj Singh begun with a boundary at point region in the very first ball he faced on a hazy and humid morning.

While Yuvraj was looking to take chances scoring more than a run a ball Laxman’s silken touch did the talking.

In full flow, Laxman had a bit of luck on his side as well even as new ball bowlers Roach and Edwards had a tough grind.

While on 79, Laxman had a thick inisde edge from from a short Roach delivery but the ball beat the stumps and wicketkeeper Carlton Baugh to go for boundary.

Yuvraj too had hits and misses and had a big appeal of Edwards but with the ball missing his leg stump line he remained unhurt.

His reckless-looking innings however was cut short by Sammy who had the stylish left-hander plumb before the wicket.

The Punjab batsman had the perfect platform given by yesterday’s centurion Rahul Dravid and Laxman but he failed to utilise the opportunity to establish himself.

Dense fog accompanied by a light drizzle meant that the first-session was curtailed by 19 minutes because of poor light.

Laxman remained unaffected by Yuvraj’s restless innings as he notched up his fifth hundred at the Eden by reaching the mark in 157 balls with nine boundaries.

Skipper Dhoni joined Laxman in the middle and the duo took the match away from the West Indians. (PTI)