Sachin Tendulkar continued to remain in waiting for his elusive 100th international century even as India looked strong on 212 for three at tea on the first day of the second Test against the West Indies. 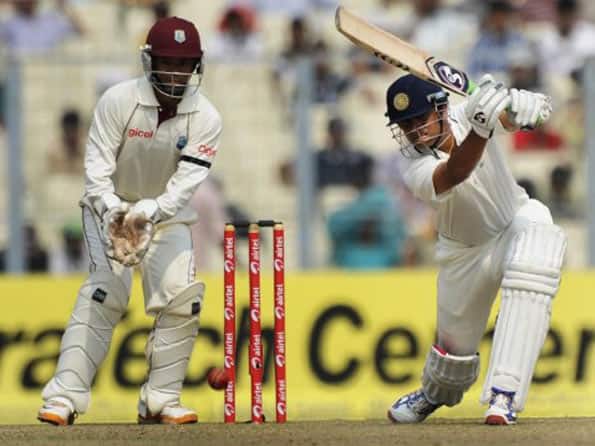 Sachin Tendulkar continued to remain in waiting for his elusive 100th international century even as India looked strong on 212 for three at tea on the first day of the second Test against the West Indies.

Rahul Dravid was looking strong with 62 from 128 balls with seven boundaries, while VVS Laxman (1) was giving him company at the end of session two.

On a batting beauty, Tendulkar looked fluent, milking the inexperienced West Indian bowlers at ease as he hit five boundaries in his 38-run knock that came off 71 balls.

The crowd also started filling up the Eden Gardens with Tendulkar looking in fine touch for the landmark milestone.

But it was West Indian leg-spinner Devendra Bishoo who once again took the prized scalp just when he and Dravid were looking to make it big in their 56-run partnership.

Tendulkar could only manage to pull directly to Marlon Samuels at midwicket from a short Bishoo delivery in what appeared a very easy dismissal in the 52nd over.

The senior batsman, who last scored a century in a World Cup match against South Africa eight months ago, remained one shy of the 100th milestone from 12 Tests and four ODI innings.

Earlier, Gambhir looking good on his 17th international half-century failed to make it big as he fell four overs after lunch.

It was another ordinary shot that yielded a wicket for Edwards when Gambhir drove straight to short cover where Barath took an easy catch.

Gambhir made 65 from 103 balls with eight boundaries.

Earlier, Sehwag was hit on the back of his helmet early in his innings but he seemed unaffected scoring 38 from 33 balls with eight boundaries. He along with the Gambhir put on 66 runs for the opening wicket.

It was a typical Sehwag knock as India raced to 34 in the first five overs after skipper Mahendra Singh Dhoni elected to bat first on winning the toss.

In front of a sparse crowd of less than 1,000 in the grand 67,000-capacity stadium, Sehwag displayed his usual flair.

With Ravi Rampaul indisposed, West Indies skipper Darren Sammy took the new ball along with Fidel Edwards, a move that did not work out quite well on the slow strip.

Edwards got a bit of bounce from the Eden strip which seemed to have been shaved last evening but Sammy was unimpressive and looked ordinary.

The risk backfired for Sammy as Sehwag took the attack to the West Indies medium-pacer after being hit by a rising Fidel Edwards delivery in the third over.

After being hit for 17 runs from his first two overs, Sammy brought in Kemar Roach who was picked in the XI in place of Rampaul who is down with an upset stomach. (PTI)