England once again took control of the session.

India would have been safely placed at Tea on Day Three of the third match at Southampton, but the dismissal of Rohit Sharma at the stroke of the break meant that England firmly held the advantage for the session. Till the time Rohit suffered a brain-freeze, India had lost a solitary wicket — that of Virat Kohli. However, a solid half-century from Ajinkya Rahane gave India something to cheer about. At 214 for five with Rahane and MS Dhoni at the crease, England held all the cards.

The two Mumbai batsmen, Rohit and Rahane, looked positive and scored at a decent rate. Rahane followed up his ton at Lord’s with another confident innings. Rohit flashed at a few and got a couple of edges, but also played some confident strokes to pick up a few boundaries. However, just as he was looking set for a big score, he played a typical Rohit Sharma shot; stepped out and lofted one off Moeen Ali to Stuart Broad at mid off.

Earlier, Kohli suffered another failure — his fifth of the series — when he poked at an innocuous delivery from James Anderson to Alastair Cook at slip. His knock of 39 was his highest of the series, and he looked very secure in the middle. His dismissal came against the run of play, once again exposing a perceived weakness with the ball seaming outside his off-stump.

India resumed after lunch in a precarious position. On a flat deck where very little help was on offer for the England pacers, Stuart Broad had steamed in in the morning session, and got rid of both overnight batsmen, Cheteshwar Pujara and Murali Vijay. New men Kohli and Ajinkya Rahane were looking secure against the probing English bowling till Kohli once again poked at one to slip.

India resumed the day at 25 for one. James Anderson kept asking questions of the batsmen, but Chris Woakes looked largely nonthreatening. The introduction of Broad proved incisive, as he came in hard and sharp, and eventually got rid of both overnight batsmen. 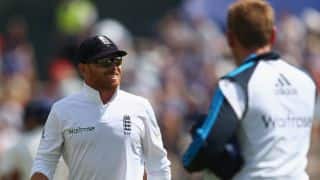 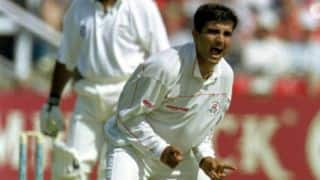