The usually aggressive build-up has turned poignant owing to Phillip Hughes’ tragic death but the on-field face-off is unlikely to be anything less than high-voltage, when India and Australia compete in the opening cricket Test of a four-match series, starting on Tuesday.

More than two weeks after landing here, India will finally get down to serious competition with Virat Kohli leading the side in place of Mahendra Singh Dhoni, who is still recovering from a hairline fracture in his right thumb.

Indians are also dealing with uncertainty surrounding medium-pacer Bhuvneshwar Kumar even as Australian skipper Michael Clarke was declared fit for the game. The visitors will be hoping to reverse their last Test series’ result in this country, when under Dhoni they had lost 4-0 in 2011-12. However, that thought will not be at the forefront when the match begins.

Instead, it will be a emotion-laden atmosphere that will welcome both teams, and for good reason. Adelaide is the adopted home of Hughes and there will be an intense outpouring of emotion before play gets underway.

Cricket Australia and South Australia Cricket Association have quite a few plans about honouring the cricketer, who was hit by a bouncer on November 24 in a Sheffield Shield game in Sydney and died two days later.

For Australian cricket, and their whole community sporting or otherwise, it has been a very tough two weeks. It is remarkable how they have mourned Hughes and celebrated every aspect of his short life, during which he played 26 Tests.

They have put cricket on the back-foot and cared for their grieving cricketers in this tragic circumstance. They were appreciative of the support they received from the BCCI and somehow managed to save the series and it remains a four-Test affair after the Brisbane Test was postponed from December 4 to December 17.

Their skipper Clarke has been a pillar of strength during this sad time. When the Indian team landed here, there was a little controversy brewing over his fitness and resultant selection for this first Test.

The way he marshalled the Australian cricketing fraternity ever since Hughes was injured, there was little doubt that he would be playing in Adelaide. And indeed, he has fought through to be ready ahead of this first encounter between the two sides.

At different times, Australian cricketers have come forth and expressed how tough it has been for them to prepare for this match. It has been an arduous process for them, getting into bat for the first time after Hughes fell, and bowl bouncers even.

After three days of team-bonding exercises and practice sessions, they are getting back to normal though. All of them have assured, come the Test, they will all give everything on the pitch and will be full of aggression.

For the visitors, this has been a long tour already, waiting two weeks for some high-voltage cricket to get underway. They started off with a practice game at the Glenelg Oval, waited patiently as Australia grieved, practiced some more and then got into Test mode with another tour-game again in suburban Adelaide.

While their colleague’s demise ought to have affected them, the Indian team hasn’t made their emotions too visible, keeping a game-face at all times. And for good reason, because India’s Test fortunes have been worrisome off late. The team is currently languishing at sixth in the ICC Test rankings and this is a proper reflection of their results in the last 12 months in this longest format. They beat West Indies at home in autumn of 2013, but after that, have lost 1-0 in South Africa and New Zealand. Thereafter, this past summer, they lost 3-1 in England.

For the first time in living memory, India haven’t played a home Test in a calendar year. While this factor must be taken into consideration, their slow progress overseas cannot be denied. For a young team, this year has been about taking small steps and gaining experience.

On each of the last three tours, the touring side was mostly unfamiliar with playing conditions in Africa, New Zealand and England, as only a handful squad members had played Test cricket in these countries previously.

This Australian tour is quite different in that respect. In 2011, apart from Dhoni, Kohli, Ajinkya Rahane, Rohit Sharma, Ishant Sharma, R Ashwin and Umesh Yadav were part of the Test squad.

While Rahane and Rohit didn’t get a chance to play three years ago, they have played a lot of cricket overseas in the last one year. The bowlers already have experience of these Australian conditions. As such the team isn’t really as under-cooked as it was on the previous three overseas tours.

The other underlining factor for the visitors will be the change in captaincy. While Dhoni has been an aggressive captain in limited-overs cricket, his leadership in the longer format has left a lot to be desired, especially in terms of overseas results.

There is a wave of anticipation over Kohli taking over the reins, even if for this one-off Test, and as such there could be a sharp contrast in the dynamics of the team.

For starters, the playing eleven might change from the last time India played Test cricket. In England, the team management believed that a five-bowler-attack was their best chance to win.

With Dhoni ruled out, Wriddhiman Saha will take his place but will he be trusted with the responsibility of batting at number six? If India go in with an extra batsman, it will mean a four-bowler-attack comprising of three medium-pacers and one spinner.

With Kumar a doubt, Ishant Sharma, Varun Aaron and Mohammad Shami will be the first-choice combination. Among the spinners, Ravindra Jadeja and R Ashwin will be prime contenders, and it is highly unlikely that leg-spinner Karn Sharma will be handed a Test debut in the lone spinner role.

The Adelaide Oval wicket is a drop-in pitch and while it is expected to have nice bounce and carry throughout, it is not expected to deteriorate too much as the Test goes on. It has been an unusual build-up to a highly anticipated series. Despite the tragedy leading onto this first Test, everyone is itching for some action. 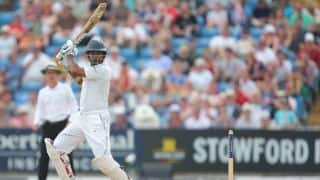