Handicapped by the poor form of some of their key bowlers, India will be under intense pressure as they go into the do-or-die sixth cricket one-dayer against an upbeat Australia on Wednesday, fully aware that any slip-up at this stage could cost them the series. 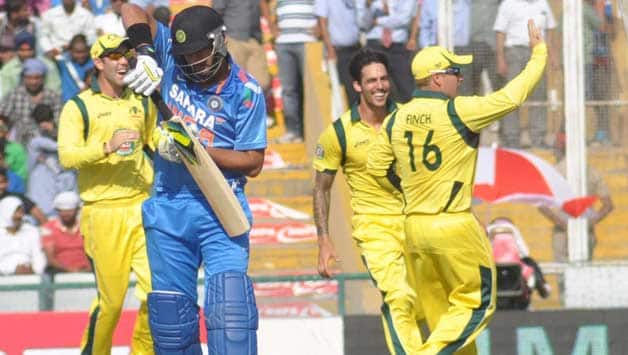 Handicapped by the poor form of some of their key bowlers, India will be under intense pressure as they go into the do-or-die sixth cricket one-dayer against an upbeat Australia on Wednesday, fully aware that any slip-up at this stage could cost them the series.

The visitors are sitting pretty with a 2-1 lead in the best-of-seven series after the successive wash-outs of the fourth and fifth games of the long series at east Indian cities Ranchi and Cuttack on October 23 and 26.

The onus is on India, whose under-performing players, need to pull up their socks and fire in unison to upset the apple cart of the Australians who came with the record of winning two seven-game series in the past.

The hosts have no option but to win the remaing two matches to clinch the series and any lapses in tomorrow’s game could turn out to be disastrous for the team.

“From our point of view this is the game we want to win. We don’t want to save it for the last game on Sunday [at Bangalore]. We want to wrap up with this game. Obviously from their [India’s] point of view they need to win to stay alive and from that point pretty crucial for them,” said Australian left arm spinner Xavier Doherty in the run-up to the crucial match at the stadium.

Among the batsmen, Virat Kohli and Mahendra Singh Dhoni are the top-scorers for the hosts, with the former consistently brilliant and the captain playing that superb innings at Mohali to help the team recover and post a challenging 300-plus total that was chased successfully by the visitors.

Openers Shikhar Dhawan and Rohit Sharma produced top drawer batting in the second ODI at Jaipur with excellent knocks of 95 and 141 not out that helped India chase a huge target of 360 with plenty to spare.

India would be looking forward to this left-right combination to provide a very good start again at the VCA ground where 300 or more scores have been put up on four occasions in the past.

The worry for India is the middle order given the way Suresh Raina and Yuvraj Singh struggled against the pace and bounce extracted by Mitchell Johnson in Mohali.

The 31-year-old Queenslander produced a scintillating show in the last game that was not washed out in the series and he will come hard at these two batsmen again in the all-lefties’ battle.

The wicket at the Jamtha stadium may not be as conducive for Johnson’s type of bowling, but he and the other speedsters have certainly exposed some chinks with their short-ball attack in the Indian batting line up.

Raina and Yuvraj many not have done much in the series so far but are capable of coming up with a scintillating show at some stage of the competition and the hosts would welcome such a display in this do-or-die game.

Doherty expected some turn from the wicket after the run-fest in this series of tall scores.

“I expected some spinning wickets as we got in the Test series here (earlier this year). Probably the last game it rained [in Ranchi] or it might have been spinning a bit. Looks like this wicket will spin a bit and spinners will play a bit more of a role,” he said ahead of the clash.

From India’s point of view, some extra turn would be very welcome especially for the struggling R Ashwin whose economy rate has gone for a toss in the batting-friendly conditions.

He has also continued to use his strange ploy of coming round the wicket and bowling ‘carrom’ balls to the right-handers.

Ashwin, who grabbed 29 wickets in the four-Test series against the visitors in February-March, has taken some heavy punishment from the in-form Australian duo of opener Aaron Finch and skipper George Bailey.

The tall Tamil Nadu off spinner needs to get his act together to lend good support to the accurate left-arm spin of Ravindra Jadeja. The other option in front of the team is to bring in leggie Amit Mishra who is yet to play a game.

To add to India ‘s bowling woes, Ishant Sharma has not looked like stemming the flow of runs after the way he was hammered for 30 in the ‘death’ over at Mohali, but his replacement Mohammed Shami impressed in the rained-off game at Ranchi.

Bhuvneshwar Kumar too has not looked good enough so far and gave way to Jaydev Unadkat in the Ranchi match which was abandoned when rains came during India’s run-chase.

Shami, Unadkat and R Vinay Kumar, who too has been expensive, formed the new ball combination in Ranchi.

It remains to be seen whether Ishant will be given another chance to rectify his poor display in the series as he had a long stint at the nets with Ashwin yesterday.