The much awaited final 15-member squad for team India was announced on Tuesday in Mumbai at a meeting in the BCCI headquarters. Skipper MS Dhoni, who recently retired from Test cricket, will continue to lead the side with Virat Kohli acting as his deputy. The likes of Shikhar Dhawan, Rohit Sharma, Ajinkya Rahane, Suresh Raina, Bhuvneshwar Kumar and Mohammed Shami were automatic selections in the side.

The selectors have also chosen to go with Ravindra Jadeja, who is currently recovering from a shoulder injury. Meanwhile, Umesh Yadav and Ishant Sharma have been picked as the other seam bowlers in the team. Ishant was left out of the ongoing fourth Test in Australia due to a niggle. Ambati Rayudu has also held on to his spot as the reserve batsman after some good performances in the recent One-Day Internationals (ODIs).

Delighted for Binny. Like his dad gets to play World Cup. Feel bad for in-form Vijay, Uthupa & Pandey. Must have missed out v narrowly

By picking Ravindra Jadeja, who has fitness issues, and Axar Patel, the selectors have passed the chance to pick a leggie .#IndiaWorldCup 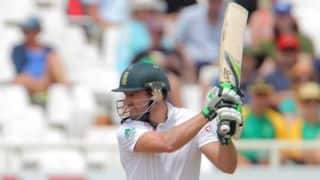