India tour of Australia 2014-15 venues announced, no Test at WACA

India tour of Australia 2014-15 venues announced, no Test at WACA

Cricket Australia (CA) announced venues for India series in 2014-15 on Wednesday. Adelaide, Brisbane, Melbourne and Sydney are the four cities where they will host the Test matches. 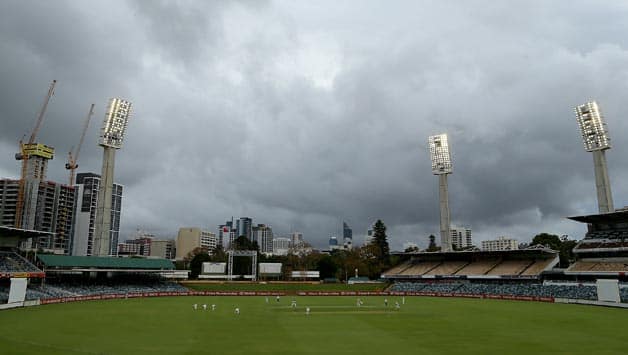 The last time India played Australia in WACA was in early 2012, when the vistors were whitewashed by the hosts © Getty Images

Cricket Australia (CA) announced venues for India series in 2014-15 on Wednesday. Adelaide, Brisbane, Melbourne and Sydney are the four cities where they will host the Test matches.

There will be only four Tests played against India which will be succeeding to the ICC World Cup 2015.

Cricket Australia Chief Executive James Sutherland was quoted as saying by the official website, “Unfortunately due to the unique nature of the schedule next season, with a World Cup year, there was going to be a couple of States disappointed about our Test match allocation.”

“This was certainly one of the more difficult programming issues that Cricket Australia has faced and all the pros and cons of each option were weighed up very carefully before making our decision.

“It is still a big summer and there is plenty of cricket to go around but in regard to only having four Tests, this is a one-off situation that we don’t see happening in the foreseeable future.

This time Perth didn’t get the chance to host a Test match. The last Test hosted in Perth was between Australia and South Africa last year end.

“All have strong claims for hosting a Test and many factors were taken into consideration, including the allocation of 2015 ICC Cricket World Cup matches, but on this occasion the Adelaide Oval and the Gabba were considered to have the strongest claims.

“The Adelaide Oval is scheduled to complete a $535 million dollar re-development this season that will see the venue deliver world-class facilities for fans, players, broadcasters and media. The Oval has also built up a strong history of attendance over many seasons and the new facilities will only add to that fan experience.

“The Gabba is a large high quality venue in Australia’s third largest city and serves a large population of Australian cricket fans, including the large urban areas of the Sunshine Coast and the Gold Coast, plus many who travel long distances to make the annual trip to Brisbane for the Test match.

“Another factor in the Gabba’s favour was the limitations on their ability to effectively host other international cricket matches in the 2014-15 summer due to the G20 summit and the 2015 Asian Cup being scheduled respectively in November 2014 and January 2015.

“Although the WACA has missed out on a Test match, they will play host to up to four limited over matches in the 2014-15 season that will see South Africa tour in a limited over series in November as well as India and England competing in a tri-series in January prior to the 2015 ICC Cricket World Cup.

“Though a traditional Test match venue with a proud history, the WACA ground has the smallest capacity of the five mainland Test venues and has historically attracted lower attendances. The WACA has been working hard to improve the facilities for its fans but it still requires significant improvements.

Western Australia Cricket Association (WACA) Chief Executive Christina Matthews expressed disappointed with the decision of not giving them an opportunity to host Test match against India.

“The WACA is extremely disappointed in this decision. The fans in WA have consistently supported Test cricket at the WACA and we are devastated that thousands of loyal cricket fans will not be able to see the Test match live against India.

“The WACA has been undergoing a planning process to look at increasing the size of the ground and improving patron facilities and unfortunately this takes time and could not be done in time for the 2014-15 season.

“We will be continuing this work as well as discussions with the State Government in relation to planning around the new Perth Stadium and improvements to the WACA ground,” said Ms Matthews.

“There will still be a lot of high quality content next summer in WA, plus a strong program of matches during the 2015 ICC Cricket World Cup,” said Sutherland.

“Hobart still remains an important international venue to Cricket Australia. Blundstone Arena is currently undertaking a $30 million dollar re-development that will see its capacity increased to 20,000 and we are working closely with Cricket Tasmania on scheduling a match to appropriately celebrate the completion of this exciting new development.

“Tasmanian cricket fans have a lot to look forward to next summer. Not only are we undertaking a fantastic re-development of Blundstone Arena we are also playing host to three 2015 ICC Cricket World Cup matches. We will be working with Cricket Australia in regards to scheduling a game to officially launch the new facilities next year,” said Cricket Tasmania Chairman Tony Harrison.

The fixture is yet to be announced and the remaining 2014-15 schedule is yet to be confirmed, according to Cricket Australia website.

Pakistan reach 95/2 at tea on Day 2 against Zimbabwe