Rohit Sharma says that the Indians have got accustomed to the Australian conditions by now.

India batsman Rohit Sharma says he is confident of his team putting up a good show in the first Test against Australia as past two weeks’ stay here and two tour-games have helped them get familiar with the conditions.

The visitors have been in Adelaide for the last two weeks after the Test series was rescheduled following Australian cricketer Phillip Hughes’ tragic death.

“We have stayed here for the past two weeks, have played two tour-games, and we had a good centre wicket practice as well. It has helped us to know the conditions better. In the past too, we performed well at Adelaide. So it will be a good start and hopefully we will carry the momentum in the next matches as well,” said Sharma ahead of the opening Test, beginning here on December 9.

Talking about the tragic circumstances, Rohit said, “To be honest it was a very sad incident. We all know about it but cricket has to go on. The game will go on. Mentally, everyone in our team is focussed to do well.

“When you go out in the park, we only think about how to perform and give our best. That incident will be there in everyone’s mind when the first Test starts, but when it comes to the game we will be focussed on how to do well.”

Rohit recently had massive success in the One-Day International (ODI) format, where he hit his second ODI double century against Sri Lanka at Kolkata, prior to leaving for Australia.

He had hit the highest ODI score of 264 runs with 33 fours and nine sixes, and replicated his achievement of hitting an ODI double hundred last year against Australia at Bangalore, a score of 209.

But despite his success, he has not been able to pin down a permanent spot in the Test XI, featuring in only one Test in the five-match series in England as Ajinkya Rahane was the more preferred option for the team management.

In Southampton too, Rohit threw away his wicket going for an attacking stroke ahead of tea-time. That added to the already disappointing show in this year of overseas Tests with not-so-impressive displays in South Africa and New Zealand.

“I would rather be positive and say it inspires me a lot,” said the batsman when asked if the lack of a permanent spot in Test side hurt him. “Things don’t always go the way you want and you have to keep working and get the best out of situations. Am quite focussed and well prepared.”

“I haven’t done anything different to the way I prepared for the past overseas tours, but I have concentrated on preparing the right way. Am looking forward to this challenge and I don’t want to think about what happened in the past. It is very important to look ahead. This is a challenging tour and am focussed and determined to do well,” Rohit insisted.

For the Indian team as a whole, this series will also mark the culmination of a calendar year that hasn’t seen them do too well at the Test arena. The team lost 1-0 in South Africa, 1-0 again in New Zealand and then 3-1 in England.

This four-Test series in Australia is the chance for them to learn from their past experience and reverse India’s 0-4 loss here in 2011-12.

“The past year has been a great learning experience for all of us. We have a young team with seniors retiring last year and it has been a good experience to play in these different overseas conditions. Overall, we have done well.

“We were a bit unlucky in Johannesburg where the match slipped off in the last session. In New Zealand, Ishant Sharma bowled well in Wellington but Brendon McCullum scored 300-plus runs to deny us. These things have kept us away from winning Tests overseas,” he said.

“We won a Test in England, but unfortunately we lost the series. From these experiences we need to learn and not repeat those mistakes here in Australia. This is a four-match series and there is not much gap between the matches. So mentally this will be a challenge for us.

“But we have spent the last two weeks working hard as a team and as individuals, improving our game. This has been a good preparation and we are keen to finish it off well in this series,”added Rohit. 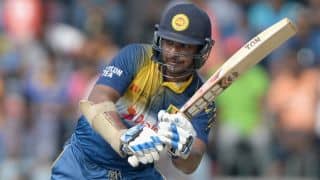