'I was probably a bit naive, but I didn't really break any rules.', Ballance said,

Left embarrassed after photographs of him dancing shirtless in a nightclub were splashed across newspapers, England batsman Gary Ballance said he would never repeat such behaviour even though he was merely trying to have some fun.

Ballance more than made up for the episode by scoring 110 runs in the ongoing second cricket Test against India here, adding to his century tally at Lord’s, where he got his maiden Test hundred earlier in the summer against Sri Lanka.

This was his second century in four Tests and helped England finish the day at 219/6, 76 runs behind India’s total.

“Just to score a hundred at Lord’s is amazing really. It’s been an interesting week. I didn’t really expect it, but it’s nice to score some runs and put us back in a decent position,” he said, referring to the night-club incident after the drawn Test in Nottingham.

The batsman had been photographed dancing with his shirt off and although he didn’t break any curfew rules after the Test was over, he was slapped on the wrists by the ECB for indecent public behaviour.

“I didn’t see it coming, and it was a bit embarrassing. I was probably a bit naive, but I didn’t really break any rules. I was just having fun after a Test match. But I’ll learn from that, and probably won’t do it again,” said Ballance admitting regret.

“I felt a bit of pressure turning up here on day one, with what happened. But everyone around me was very supportive – the coaches, all the players, my family were backing me and saying mistakes happen. You’ve got to learn from it, and move on,” Ballance said.

Ballance said patience was the key to his knock which pulled England out of trouble here. “It is a nice place to play cricket, and I just love batting here. I thought that I will have to scrap hard on this wicket. It will not be pretty or exciting to watch, but at the end of the day, it’s about doing a job. I tried to be patient,” Ballance said after his hundred yesterday.

“I knew I was going to play and miss, so tried to leave as much as I could and just waited for anything with a bit of width or anything too straight. Luckily, I fought hard – got an edge through the slips early on – and being patient paid off,” he added.

The edge he mentioned was induced by Stuart Binny in the 40th over of the innings and skipper-keeper Mahendra Singh Dhoni let it go as Shikhar Dhawan watched frozen at first slip. Ballance was on 32 at that time and made this chance count. 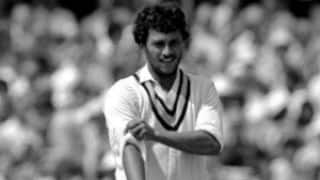