Graeme Swann would like to see Cook do something unnatural.

Former England spinner Graeme Swann requested captain Alastair Cook to break the monotony of life and indulge into some entertainment that might get him out of his poor run of form in the ongoing Test Series against India in.

Cook has gone without a century in last 27 innings. He has been awful particularly against Australia, Sri Lanka and India and in the 2nd Test at Lord’s, he only managed to score a 10 and 22 in both the innings, reported cricket365.com.

Swann said, “Cook has done everything right. But nothing has worked for him. So personally I would like to see him do something unnatural, go against his game. Go have a couple of beers, eat some junk food, calm down and take some pressure off.” He further believes, “And then smash the bowling when you bat. Just throw caution to the wind. But I know he won’t do that. So I don’t really know the solution to this problem. The senior players just aren’t firing, Cook isn’t in form.”

Swann also questioned the performances of Stuart Broad and James Anderson, as both of them have been retained for the 3rd Test which is to be played at Southampton. Jos Buttler will be replacing Matt Prior and Simon Kerrigan have been left out as well.

Swann feels, “James and Stuart should be very disappointed with the way they bowled on the first day in London because it was a wicket more suited to them. And that is the problem for England.” He further added, “We haven’t even got that one bowler to cover for the whole of bowling attack either.” 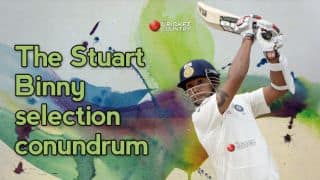