The Indian pacers put up a courageous performance in the first Test at Trent Bridge.

India’s bowling coach Joe Dawes feels it’s time for Ishant Sharma to take responsibility and lead the Indian bowling attack. The lanky pacer bowled well in his New Zealand and impressed with his spell in the post-lunch session on Day Three of the first test against England at Trent bridge. Dawes emphasised the need for Ishant to scale up after the exit of Zaheer Khan.

Dawes spoke to BCCI.tv ahead of the second Test at Lord’s. When asked about who according to him should be leading the Indian pace attack after Zaheer, he confidently said, “ The obvious choice is Ishant. He has been around for a long time, played 55 Test matches. He needs to step up and assume the leadership of this attack.”

He added, “I think he is exciting. You’ve got a bloke who’s 25 years of age and played 55 Test matches. He has had a pretty rough time so far – came in as a super star, got injured, went in and out, had various levels of success – some incredible highs and lows. I admire the fact that he doesn’t let much of that affect him. We push him to be the leader and he wants to be one. We’ve got high expectations off him and does he always meet them? No. But that has never been for the lack of trying.”

When questioned about Ishant’s inconsistency he said that Ishant doesn’t gets the reward in spite of bowling well at times. He further believes, “One thing I can tell you is that now he understands the mental side of bowling much better. He knows what he wants to do and we have seen that in the last year or so.”

He also spoke about how the pacers shaped up. Dawes said, “We are in a good place when it comes to our pace attack, having seven, including Stuart Binny, to choose from. For the first time we’ve got a couple of tall guys in Ishant and Pankaj, which is good. We’ve got Bhuvi [Bhuvneshwar Kumar], who swings the ball and we have pace in [Mohammed] Shami and Varun [Aaron].” 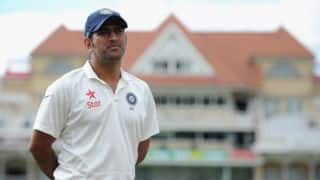